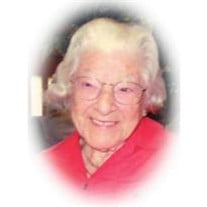 Reba Beckett Sigafoo Lummis 103, of Atco, NJ passed away early Saturday morning April 14, 2012, under hospice care at her home, in The Fountains At Cedar Parke. Born August 28, 1908 in Salem County, she was the daughter of the late Harry D. and Susan nee Landis Beckett, and the wife of the late William A Sigafoo, who passed away in 1971, and the late Warren C. Lummis Jr. Esq., who passed in 2004. Reba grew up in Norma, but attended High School in Bridgeton and graduated with the class of 1926. After school, she went to work as a secretary to the high school principal, a job she loved and held from 1926- 1945, she then served as secretary to the Cumberland County Superintendent of Schools from 1945- 1970. Reba has been a devoted member of the Woodruff United Methodist Church since 1938, and had served as secretary to the Administrative Board of the church from 1975-1983. She also served as a secretary to the Church Women United for six years. In 1951, she organized and served as President of the Cumberland County Educational Secretaries Association from 1951- 1955, she also organized and served as President of the Cumberland County School Business Officials from 1952-1954. Reba was a member of the New Jersey Association of Educational Office Professionals and served as a Director from 1945-1946, Treasurer from 1947-1948, Vice President from 1949-1950, and President from 1951-1953. She was a Life member of the National Educational Office Professionals, and honorary life member of the New Jersey Congress of Parents and Teachers and an honorary life member of the Cumberland County Associated Boards of Education. In 2008, she was honored by the Cumberland County Historical Society on her 100th birthday , for her dedication as a trustee of the Society, and along with her late husband Warren, as a benefactor. It was with the direction and finance provided by her late husband Warren, that the society was able to purchase the former Farmers and Merchants Branch Bank in Greenwich to house the Lummis Library. In 2008, the library was renamed the Warren and Reba Lummis Genealogical and Historical Library to honor Reba's support and vital interest in the library. In 1998, she wrote an account of her family entitled "The Beckett Girls", which can be found in the Library. Reba enjoyed her time spent with the recent Bridgeton Open History group, recounting the The Story and History of Bridgeton. In a recent article from The News, it read, "She's 103 now. She thinks she's 75. She acts like she's 60. How many people living today, can say they lived through The Depression when they were in their 20's, and remember dates, places, and most astonishingly, names. Reba Lummis can." She was a remarkable lady, who will be truly missed. Surviving her are her nieces Virginia Downs Loder, Alice Corey and her husband Harry, and nephew Howard R. McHenry Jr., and her great niece and caregiver Pamela Nesbitt and her husband Thomas, nephew Dr. Robert A Lummis and his wife Pat, special caregivers Annette Bombara , Doris Kilgore, and Terry Mudurey, and several other nieces and nephews. Besides her husbands, she was predeceased by four sisters Mary Downs, Grace Beckett, Hannah McHenry, and Ellen Reustle, and her baby brother Avery Beckett.

Reba Beckett Sigafoo Lummis 103, of Atco, NJ passed away early Saturday morning April 14, 2012, under hospice care at her home, in The Fountains At Cedar Parke. Born August 28, 1908 in Salem County, she was the daughter of the late Harry... View Obituary & Service Information

The family of Reba Beckett Sigafoo Lummis created this Life Tributes page to make it easy to share your memories.