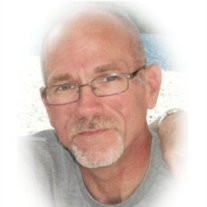 Michael James Dawson, 53, of Bridgeton, NJ passed away on June 9, 2013 at Temple University Hospital surrounded by his family. He was born on November 5, 1959 at Bridgeton Hospital in Bridgeton, NJ to Laura Delores (Dee) (nee Wranich) and Albert Edward Dawson III. Michael grew up in Bridgeton, NJ and graduated from Bridgeton High School in 1979. In his high school years, Michael worked as a janitor at Bridgeton High School. After graduation, he was employed by H.H. Hankins Lumber Company in Bridgeton. Shortly thereafter, he moved west to Phoenix, Arizona where he worked at Western Medical for over 17 years customizing wheelchairs and homes for people with disabilities. He later changed his career path and went into hotel management in Phoenix and San Diego, CA. In 2010, he made his way back home to New Jersey to be closer to family. Michael was a good friend, uncle, brother and son. He enjoyed spending time with his nieces and nephews and the rest of his family. He never asked much of others and was always willing to give as much as he could. Michael was an animal lover and has volunteered his time to animal shelters. He enjoyed working in the yard, being outdoors and boating. He loved the beach and being in or near the water. Michael also enjoyed flying kites and he loved to travel, his favorite place he had visited was Hawaii. Michael was a people person and enjoyed telling stories of his adventures and travels over the years. He loved life. Michael is survived by his mother and stepfather, Laura Delores (Dee) and Ted S. Uber of Bridgeton; his father and stepmother, Albert Edward III and Nadine (nee Depka) Dawson of Westville. He is also survived by three brothers, Bruce Dawson, Richard W. and wife Celeste Dawson of Bridgeton, and Ted A. and wife Lori Ann Uber of Tampa, FL, three sisters, Vicki (nee Uber) Rugenus, Deanne (nee Uber) and husband Chris Laing of Bridgeton, and Diana Dawson of Westville, along with twelve nieces and nephews and eleven great nieces and nephews. Funeral Services will be held privately.

Michael James Dawson, 53, of Bridgeton, NJ passed away on June 9, 2013 at Temple University Hospital surrounded by his family. He was born on November 5, 1959 at Bridgeton Hospital in Bridgeton, NJ to Laura Delores (Dee) (nee Wranich) and Albert... View Obituary & Service Information

The family of Michael James Dawson created this Life Tributes page to make it easy to share your memories.

Michael James Dawson, 53, of Bridgeton, NJ passed away on June...