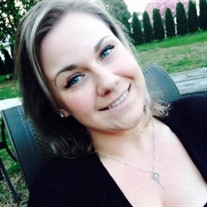 It is with great sorrow we announce the passing of Melody Dawn Giovannetti, 34, of Bridgeton. Melody gained her wings at the first light of day on March 7th, 2022. She passed away peacefully after having a recent diagnosis of cancer. She was surrounded by light, so much love, and the prayers of many. Melody (“Meh”) was born in Bridgeton on August 31st, 1987, to the late Patricia (nee. Bowers), and Joseph Giovannetti both of Bridgeton. Melody was in the CRHS class of 2005. For her graduate degree she attended East Tennessee State University where she obtained a Bachelor of Science degree with honors in 2013. After fulfilling her love of teaching, Melody found a job she that she adored and dedicated herself to at the former Modern Heating in Bridgeton. She had a love for the beach and suntans, fancy things, glitter, all things sparkly, “snackies”, yummy food, her fancy rims and clean cars; but more than anything she had her love of animals. She will be greatly missed by her babies Rex and Chica, and she is now reunited with her fur baby Lil Mama. Melody’s heart was pure, and it showed when you met her. Her sense of humor was one of a kind, and she will be missed by all who were lucky enough to know her and the ones whose hearts she stole. She was predeceased by her mother, Patty, uncle Charles Carter, and furry little sister Sugar Bear, Paternal grandparent Calipso and Dina Giovannetti, and maternal grandparent Walter “Ike” Garvin; she leaves behind her father Joseph (Kathy) Giovanetti, Maternal grandmother Sara Garvin (Grammy as Mel nicknamed her), sister Crystal Durham (Perry), beloved niece Payton and nephews Cole and Chase Durham, Uncles Giancarlo (Eliana) and Raimondo (Janis), and Aunt Lelia D’Amuri. She also leaves behind many cousins, and good friends. Melody will be immensely missed by her fellow Meh/best friend, Emily Gardner-Fortner, who fulfilled one of Mel’s promises to care for her until they parted. Family and friends are invited to attend a Funeral Liturgy on Tuesday morning March 15, at 10:00am from the Parish of the Holy Cross/ Church of the Immaculate Conception, 312 North Pearl St. Bridgeton. The interment will take place privately. Friends may call on Friday, March 11, from 4:00pm till 8:00pm at the SRAY-WEBSTER FUNERAL HOME, 62 Landis Ave. at Carll’s Corner, Upper Deerfield Twp. In lieu of flowers, the family suggests donations in Melody’s memory to a animal shelter or rescue of one’s choice.

It is with great sorrow we announce the passing of Melody Dawn Giovannetti, 34, of Bridgeton. Melody gained her wings at the first light of day on March 7th, 2022. She passed away peacefully after having a recent diagnosis of cancer. She was... View Obituary & Service Information

The family of Melody Dawn Giovannetti created this Life Tributes page to make it easy to share your memories.

It is with great sorrow we announce the passing of Melody Dawn...