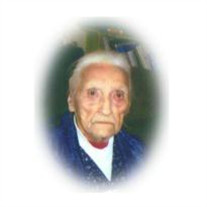 MARY D."SOUTHERN WANDERING OAK" HUGHES Mary D. "Southern Wandering Oak" Hughes, 101 of Fairfield Twp. passed away surrounded by her loving family on Friday evening June 10, 2011 at her residence under Hospice care. Born in Sharon Hill, Pennsylvania, she was the daughter of the late Clarence and Blanche nee Pierce Driggus and the wife of the late Clifford Hughes, who passed away in 1971. Mrs. Hughes moved to this area when she was nine years old and had previously lived in Cedarville, but had been a resident of Fairfield, most of her life. She was a seamstress by trade, and had retired from the former Major Clothing in Bridgeton, after many years of service. Mary had also worked on many farms in the Cedarville area, and was a domestic housekeeper for the April family of Carmel for 30 years. She was the oldest living member of the Nanticoke Lenni Lenape Indian Tribe of Bridgeton, was very proud of her Native ancestry, and enjoyed attending gatherings and Pow Wows. On her 100th birthday, she was honored by her family and tribal family with a party held at the tribal center, in Fairfield Twp.. She loved sewing, mending and making clothing for her children and grandchildren. She and her late husband also raised chickens, turkeys and ducks. She formerly enjoyed attending the First Church of the Nazarene of Bridgeton, when her health would allow. She was a spirited soul, who will be remembered for her quick wit, and words of wisdom. Surviving her are her four children Mary Lou Hughes, Margaret Green Kuff, Herbert Hughes, and Howard Hughes, her sixteen grand children Grace Boardley, Nathan Boardley, Carl Boardley, Michelle Eddings, Daniel Saunders, Wanneta Figueroa, Charles Green, Cornella Pierce, Robert Green, Maria Ernst, Michael Hughes, Howard Hughes Jr., Stephen Hughes, Joshua Hughes, Viola Hughes, and Sherry Hughes, 30 great grandchildren and 19 great great grandchildren. Besides her husband Clifford, she was predeceased by three children Sara Boardley Saunders, Horace Hughes, and Benjamin Hughes, two brothers Clarence Driggus Jr. and Walter Driggus, a sister Cynthia Pierce, and a grandson John Green.

The family of Mary D. Hughes created this Life Tributes page to make it easy to share your memories.