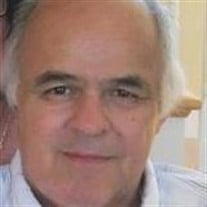 Larry J. Durham of Deerfield Twp. passed away early Sunday morning May 31, 2020 at his home under the care of Hospice. He was 67 years old. Born in Bridgeton and raised in Greenwich, he was the son of the late Allen M. Sr. and Agnes Carney Durham, and the husband of Linda Nicholson Durham. Larry and Linda had been married for 35 years. Larry grew up in the Back Neck section of Greenwich and attended the Morris Goodwin School. He was a 1970 graduate of Bridgeton High School and also attended Salem Technical School where he learned his skill as an electrician. He worked for several company’s including Chamming Electric in Vineland and Granata’s Electric in Bridgeton until his health started to fail. He loved hunting and fishing, crabbing, gardening, and playing pool. He was a fan of baseball and played a lot of ball in his younger years. He, like his father and brother also loved to get up early in the morning and take rides through the back farm roads of Greenwich or any place that was in the countryside. Most of all he loved his family and was a devoted husband, father, grandfather, brother, and son. Larry will always be remembered in their hearts. Surviving him is his wife Linda, his children: Matthew A. Durham and his companion Katilyn , Danielle Durham all of Bridgeton, Brian Durham and Kelly Weatherhead both of Virginia; a brother Allen M. Durham Jr. of Bridgeton, sisters, Donna Mosley of Hopewell Twp., Ethel Scott and her husband Thomas of Virginia, Joann Durham of Florida, his six grandchildren: TJ Weatherhead, Patrick Weatherhead, Hanna Durham, Henry Durham, Ayden James, one grandchild on the way, and many nieces, nephews and cousins. Larry was predeceased besides his mother and father, by a baby sister Frances Durham. Private graveside services for Larry will be held in Fernwood Memorial Park, Hopewell Twp., and a celebration of Larry’s Life will be held at a future date. In lieu of flowers, the family suggests donation in memory of Larry be sent to The American Heart Association 7272 Greenville Ave. Dallas, TX 75231 or to the South Jersey Regional Animal Shelter 1244 North Delsea Drive Vineland, NJ 08360.

Larry J. Durham of Deerfield Twp. passed away early Sunday morning May 31, 2020 at his home under the care of Hospice. He was 67 years old. Born in Bridgeton and raised in Greenwich, he was the son of the late Allen M. Sr. and Agnes... View Obituary & Service Information

The family of Larry J. Durham created this Life Tributes page to make it easy to share your memories.