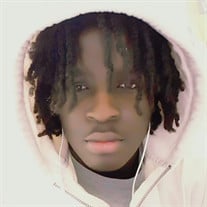 Ja’Von Nathaniel “Darkness “Rankin was born on October 8, to 1996 to Kiesha Rankin in Washington Township, New Jersey. Ja’Von transitioned to be with the Lord suddenly on January 10, 2018. He was predeceased by his loving grandfather Andrew “Jack” Rankin, Jr. and devoted grandmother Bernice A. Rankin (nee Davis). Educated primarily in Christian schools, Ja’Von attended Maranatha Baptist School in Millville, New Jersey for kindergarten and 1st grade. One of the ways his mother Kiesha helped to teach him to read was to buy him comic books with Marvel being his favorite. He completed grades 2nd through 5th in the Vineland Public Schools system. From grades 6 to 8, Ja’Von attended the Home School Academy of South Jersey in Millville, New Jersey. He graduated from Saint Joseph High School in Hammonton, New Jersey in 2014 and attended Albright College in Reading, Pennsylvania for the 2014-2015 school years. Ja’Von earned an associate degree in Arts and Sciences from Camden County College in December 2016. Gifted with an outgoing personality and an amazing smile Ja’Von was a charismatic young man whose life’s motto was that he “wasn’t here to be happy, he was here to make others happy”. In his short time on Earth he was able to live out his motto in so many ways and in doing so showed himself to be a very happy young man. From the ways he loved on his family and friends to his passion for music to his awe-inspiring athletic abilities, Ja’Von possessed a unique ability to make people feel good. Using his brilliant contagious smile as his lead, Ja’Von would light up any room with his talent to engage and entertain people. Ja’Von protected those he loved without hesitation, which added the role of protector to his many positive attributes. Sports, which Ja’Von loved, always served as inspiration and aspiration for him. At age four he engaged in sports starting with midget football. He went on to participate in mini wrestling, karate, basketball, soccer and track and field. As an integral member of the Men’s Track and Field teams in his sophomore and junior years at Saint Joseph High School, Ja’Von successfully competed in the Sprints, Hurdles and Relays. His fine athletic ability helped him set records in the 4x 200 and the 4x 100 races in the Middle Atlantic Conference and bring his team three state titles. An enthusiastic Philadelphia Eagle fan, Ja’Von also earned varsity letters in football and wrestling. Sidelined by a serious illness, 2015 was Ja’Von last year on the track and field team at Albright College. His demonstrated leadership and humility amongst his team mates earned him the respect of his coaches and a paid role as an assistant track coach at Saint Joseph High School. Gifted with an outgoing personality, good looks and a strong desire to entertain, Ja’Von’s love of music and dancing came from quality time spent with his mother Kiesha when he was a preschooler. Ja’Von gradually and confidently embarked on a career in entertainment. He planned a multifaceted career and chose the stage name “Darkness”. The name Darkness he felt would communicate his boldness adventurous nature, his self confidence, and his resilient position in the world as a competent and capable young Black man. He wrote and produced thought provoking music that showed his passion for self expression and utilized social media to share his work with the world. His talent as a lyricist and rapper, and skill as a dancer, is instantly recognizable on both his You Tube and Instagram pages. Ja’Von’s memory will be cherished by his mother Kiesha Rankin, his uncle Ashanti Rankin (Ann) his great-grandfather Nathaniel “Henry” Davis. He was predececeased by his grandfather Andrew “Jack” Rankin, and devoted grandmother Bernice A. Rankin ( née Davis). A host of extended family and friends will also remember him with love.

The family of Ja'Von N. Rankin created this Life Tributes page to make it easy to share your memories.

Ja’Von Nathaniel “Darkness “Rankin was born on October 8, to...