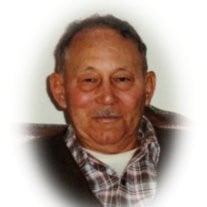 Francis F. Ridgway, 88 of Fairfield Twp. passed away on Saturday morning April 13, 2013 in South Jersey Healthcare Inpatient Hospice Center, Bridgeton. He had been in failing health for the past two months. Born in Greenwich Twp., he was the son of the late Mike C. and Caroline D. (nee Muntz) Ridgway, and the husband of Edith (nee Pierce) Ridgway. Finn as he was called had been an area resident for the past 65 years, but had grown up and attended school in Delaware. He was formerly employed with Dix Bros. farms, Durham Farms and lastly until his retirement with Halka Nurseries all in Back Neck, Fairton. He enjoyed farming, raising his garden full of pole limas, watching wrestling on television, and spending time manicuring his lawn on his John Deere. He especially loved spending time with his granddaughter and his great grandsons, Allen and Avery. He was a quiet man, who was well liked by all who know him. He is survived by his wife of 65 years, Edith, his son in law Ed Foster of Florida; his granddaughter Tara Killiebrew of Carneys Point; his great grandsons Avery Killiebrew and Allen Killiebrew; his sister Verna Durham of Dover, Delaware, and several nieces, nephews and various relatives. He was predeceased by his daughter Edith Mae Foster, a sister Eunice Sammons; and three brothers, William E. Ridgway, Floyd C. Ridgway, and Lawrence Ridgway. Family and friends are invited to attend funeral services on Thursday April 18, 2013 at 12:00 p.m.from the SRAY-WEBSTER FUNERAL HOME, 62 Landis Ave. at Carll’s Corner, Upper Deerfield Twp. Chaplain Glynn Durham will officiate. The interment will be in Overlook Cemetery, Bridgeton. Friends may call on Thursday morning from 11:00 a.m. to 12:00 p.m. prior to the services at the funeral home.

Francis F. Ridgway, 88 of Fairfield Twp. passed away on Saturday morning April 13, 2013 in South Jersey Healthcare Inpatient Hospice Center, Bridgeton. He had been in failing health for the past two months. Born in Greenwich... View Obituary & Service Information

The family of Francis F. Ridgway created this Life Tributes page to make it easy to share your memories.

Francis F. Ridgway, 88 of Fairfield Twp. passed away on Saturday...