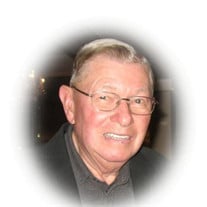 Everett G. Pierce aged 88 yrs. Of Deerfield Twp. passed away Monday evening in Pitman Manor Nursing Facility. Although he had been in declining health, his death was sudden and unexpected. Born in Deerfield Twp., he was the son of the late Alexander G. and Pauline C. Pierce, and the husband of Janice (nee Wright) Pierce. Mr. and Mrs. Pierce had been area residents, all of their lives. Everett was a Union Bricklayer and Mason by trade for over 45 plus years, and was involved with the construction of many projects in this and the surrounding areas. In his younger years, he and his wife Janice enjoyed riding motorcycles and were members of the Colonial Riders Motorcycle Club, where he formerly served as President. He and his wife were long time members of Centerton Freewill Baptist Church in Pittsgrove Twp. He enjoyed hunting, especially deer hunting, gardening, maintaining his meticulous yard and lawn, and camping. He enjoyed playing golf and when he got the chance fishing. He was a proud owner of his 1940 DeSoto which he owned for the past twenty five years, and he took several trophies at area car shows with it. He was a member of the former Carmel Volunteer Fire Company , served on the Deerfield Twp Board of Education and was a proud member of the Nanticoke Lenni Lenape Indian Tribe of Bridgeton. He was a devoted husband, father, and grandfather, who enjoyed his family. He is survived by his wife Janice, his children Palma Hepner and her husband Donald of Ocean City, Aledra Dichter and her husband Eric of Florida, Neal Pierce and his wife Bonnie of Woolwich Twp., his brother Herbert Pierce of Deerfield Twp., four grandchildren Brecken Ashenbrenner and husband Carl, Kyle Hepner and his wife Rosemarie, Alexander Pierce, and Nicole Pierce, his great grandchildren Max Ashenbrenner, and Ledra Ashenbrenner, and several nieces, nephews, and various relatives. He was predeceased besides his parents by brothers and sisters Ralston Pierce, Luther Pierce, Melvin Pierce, Dora Pierce, Carrie Durham and Nathaniel Pierce. Family and friends are invited to attend funeral services on Saturday morning June 24, 2017 at 10:30 a.m. from the SRAY-WEBSTER FUNERAL HOME 62 Landis Ave. at Carll’s Corner, Upper Deerfield Twp. A viewing will be held on Saturday morning from 9:00 till 10:30 a.m. prior to the services. The interment will be in Centerton Freewill Baptist Church Cemetery, Pittsgrove Twp. In lieu of flowers, the family suggest donations in Everett’s memory be made to Alzheimers Association Delaware Valley 399 Market Street, Suite 102, Philadelphia, PA 19106.

Everett G. Pierce aged 88 yrs. Of Deerfield Twp. passed away Monday evening in Pitman Manor Nursing Facility. Although he had been in declining health, his death was sudden and unexpected. Born in Deerfield Twp., he was the son... View Obituary & Service Information

The family of Everett G. Pierce created this Life Tributes page to make it easy to share your memories.