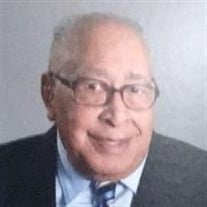 &#8220;Our Maestro of Music&#8221; Austin P. Gould was born on January 21, 1931, to the late Austin J. and Mary B. Gould and was the oldest of four children. He was a lifelong resident of Gouldtown, NJ. With encouragement from his mother,... View Obituary & Service Information

The family of Austin P. Gould created this Life Tributes page to make it easy to share your memories.

“Our Maestro of Music”