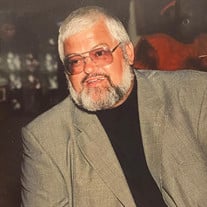 Allen M. Durham Jr. “Bubby” of Hopewell Twp. passed away late Sunday evening August 15, 2021 at his home with family and under the care of Hospice. He had been in declining health for the past year. He was 73 years old. Born November 3, 1947 in Bridgeton, he was the son of the late Allen M. Sr. and Agnes Carney Durham and the husband of the late Deborah Sooy Durham. Allen grew up in Greenwich and had worked for 42 years for Woodruff Energy as an Oil Delivery Driver, retiring in 2010. He proudly served in the US Army and was a member of the Meade Woodward VFW Post 1795, and the American Legion. He was also a member of the Fraternal Order of Eagles Aerie 2127 in Bridgeton. Allen was an excellent cook and enjoyed preparing BBQ at social events. He loved baseball and was an avid Phillies fan. He also enjoyed hunting and preparing wildgame. He was a gentle giant with a big heart, but his true love were his grandchildren and great grands. He is survived by his children, Tara Lynn Killiebrew (Kenny Harold), Hope Johnson and her husband Hal, and Betty Jo “Joie” Cossaboon, two sisters, Donna Mosley, and Ethel Scott and her husband Tom, his grandchildren, Allen Killiebrew, Avery Killiebrew, Robbie Cossaboon, and Alexi Hernandez, two great grandchildren, Allen Killiebrew Jr. and Iquill Ames Jr., his sister in law, Linda Durham, and many nieces, nephews, and cousins. Besides his wife and parents, he was predeceased by a brother, Larry J. Durham, two sisters, Frances Durham and JoAnn Durham, a grandson, Christopher Marquez, a son in law, Robert Cossaboon, and his brother in law, Waldon K. “Tony” Mosley. Family and friends are invited to attend funeral services on Friday afternoon August 20, 2021 at 12:30 pm from the SRAY-WEBSTER FUNERAL HOME 62 Landis Ave. at Carll’s Corner, Upper Deerfield Twp. A viewing will be held from 11:00am till service time at the funeral home. Interment with military honors will be in Overlook Cemetery, Bridgeton.

Allen M. Durham Jr. &#8220;Bubby&#8221; of Hopewell Twp. passed away late Sunday evening August 15, 2021 at his home with family and under the care of Hospice. He had been in declining health for the past year. He was 73 years old. Born November... View Obituary & Service Information

The family of Allen M. "Bubby" Durham created this Life Tributes page to make it easy to share your memories.