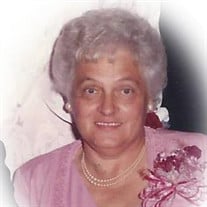 Agnes L. Durham, aged 90 years, formerly of Greenwich Twp. passed away peacefully Monday afternoon November 28, 2016 in South Jersey Extended Care, Bridgeton. Born in Dover Delaware January 22, 1926, she was the daughter of the late James and Ethel (nee Sammons ) Carney and the wife of the late Allen M. Durham Sr. Agnes grew up in the Dover area and came to Jersey when she was 17 years old and worked for Harry Adler Esq.. She and her husband Allen lived in Greenwich for many years where she drove School Bus for Greenwich Twp. Board of Education for 28 years, and also worked in the Morris Goodwin School cafeteria for some time. Agnes enjoyed cooking and being with her loving family, and trips to Delaware to see her brothers and sisters. She is survived by her children: Allen M. Durham and his wife Deborah of Bridgeton, Larry J. Durham and his wife Linda of Deerfield Twp., Ethel Scott and her husband Thomas of Virginia, Donna Mosley of Fairfield Twp., and Joann Durham of Florida; brothers and sisters, Issac Carney, Roland Carney, Ronald Carney, Larry Carney all of Delaware, Melvin “Brownie” Carney of Texas, Harriet Carney and Janet Sutton of Delaware; 22 Grandchildren; 15 Great Grandchildren; and 6 Great Great Grandchildren; and a host of nieces, nephews, extended family and friends. Besides her parents and husband Allen, she was predeceased by siblings, Clarence Carney, Loretta Drain, Donald Carney, Emma Seeney, Francis Minner, and Leona Mae Alvino, and a son in law, Walden "Tony" Mosley. Family and friends are invited to attend funeral services on Friday, December 2, 2016 at 11:00a.m. from the SRAY-WEBSTER FUNERAL HOME, 62 Landis Ave. at Carll’s Corner, Upper Deerfield Twp. The interment will be in Fernwood Memorial Park, Hopewell Twp. Friends may call on Friday morning from 10:00a.m. till 11:00a.m..

The family of Agnes L. Durham created this Life Tributes page to make it easy to share your memories.