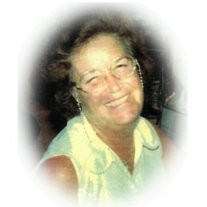 Yvonne Tucker Ewing, born March 21, 1922, passed away on February 9, 2013 at the age of 90. Born in Handley, Texas to the late Robert Leonard Tucker and Rebecca (nee Adams) Tucker, Yvonne led an active childhood excelling in sports and home economics at Gladewater High School, where she graduated in 1939. After graduation, she attended Texas Wesleyan College before starting employment in 1940 – 1944 as a civil service employee where she was a telegraph operator at Fort Hood in Colleen, Texas. It was at Fort Hood that she met and three months later married her husband Samuel Watson Ewing. They were married for 43 years until his death in 1988. Shortly after the marriage, Sam, a Captain in the Army, was shipped to the European Theater until the end of WWII. Yvonne then moved to Greenwich, NJ where she met her in laws, Robert and Grace Ewing for the first time. She lived with them until her husband returned whereupon they set up house keeping in Greenwich and her husband returned to farming with members of his family. Yvonne was active in the community serving on the local PTA for many years. She was active in the Eastern Star organization and an avid bowler as well as tennis player. In 2010 she proudly participated in the Greenwich- Stow Creek Halloween parade serving as the Grand Marshall, leading the parade in her grandson, Michael’s, golf cart. Yvonne is survived by her three children Grace Elizabeth Thompson, Robert Patterson Ewing III and his wife Deborah, Bonnie Isabel Ewing, her six grandchildren, Samuel C. Thompson, Michael Thompson, Benjamin Thompson, Rebecca Thompson- Albert, Jessica Turner and her husband Duane, and Hillary Morris and her husband David, twelve great grandchildren, her sister Beverly Black and her husband Vernon of Jacksboro, Texas, and several nieces and nephews. A memorial service will be held at the Greenwich Religious Society of Friends (Quaker) Lower Meeting house on Saturday, June 1, 2013 at 11:30am. Graveside services will be held privately and at the convenience of the family. In lieu of flowers the family requests for those who wish to send memorial contributions to Greenwich Friends Meeting, PO Box 18 Greenwich, NJ 08323 or to the Friends Village at Woodstown, 1 Friends Drive, Woodstown, NJ 08098.

The family of Yvonne Ewing created this Life Tributes page to make it easy to share your memories.