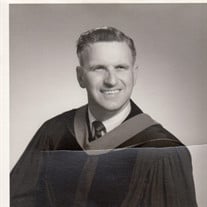 Rev. Wilbur E. Newton, aged 90 years, of Bridgeton, passed away late Saturday evening in Inspira Medical Center, Vineland. Born July 21, 1926 in Philadelphia, PA, he was the son of the late William and Agnes (nee Spowage) Newton, and the husband of Ethelyn (nee Peterson) Newton. Wilbur attended High School in Philadelphia and was inducted into the US Army in 1945, where he served with the 5th Army in Italy, and after the surrender, continued to serve with the occupational forces until his honorable discharge. Moving back to Philadelphia, he became a born again Christian, and on January 12, 1952, married Ethelyn Peterson, and from this union, three children were born. Shortly after their marriage, Wilbur felt the calling to preach the gospel, and he enrolled in the Crozer Theological Seminary in Chester, PA. , where he received a Bachelor of Divinity degree in 1961. When Crozer Seminary merged with Colgate-Rochester Seminary, he continued his education and earned his Master of Divinity Degree. He was ordained into the Christian Ministry by the Philadelphia Presbytery in May 1961. While in seminary, he served as the stated supply pastor of Second Presbyterian Church in Bridgeton, where he merged that congregation with Irving Avenue Presbyterian Church also in Bridgeton, which eventually became Bethany Presbyterian Church. He was obliged to leave so the new congregation could call its own pastor and he then served the Presbyterian Church of South Amboy, NJ for 25 years. In 1987 Wilbur and his wife Ethelyn purchased a home in Bridgeton, and he started a ministry among migrant workers in Cedarville, which he continued until his passing. In 1988 he was appointed a Chaplain of the Bridgeton Police Dept. by City Council, a position he was still serving. Rev. Newton is survived by his wife Ethelyn, two daughters, Susan Caplet of Lebanon, CT, and Diane Inman of Holmdel, NJ, his son David Newton of Carpinteria, CA, nine grandchildren and three great grandchildren. Family and friends are invited to attend a memorial service on Friday February 3, 2017 at 11:00a.m. at Deerfield Presbyterian Church, 530 Old Deerfield Pike, Deerfield, NJ. Friends will be received one hour prior to the services at the church. The Rev. Dr. Ken Larter will officiate. Private burial with military honors of the cremains will take place in the Cumberland County Veterans Cemetery, Hopewell Twp. In lieu of flowers, the family suggests donations to First Baptist Church Bridgeton, Elevator Fund, in care of First Baptist Church, 136 East Commerce Street Bridgeton, NJ 08302.

The family of Rev. Wilbur Edwin Newton created this Life Tributes page to make it easy to share your memories.