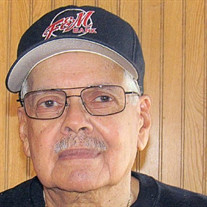 Urie M. Morris aged 86 years of Bridgeton, passed away suddenly on Saturday afternoon October 27, 2018 in Inspira Medical Center, Vineland. Born in Bridgeton, he was the son of the late Urie Ridgeway and Sara Morris, and the husband of Helen (nee Goldsboro) Morris. Urie attended the Bridgeton School System and graduated from Bridgeton High School with the class of 1951 where he played baseball for three years. He was employed for over 50 years with Menz Bros. Dry Cleaning, but his love was baseball. He started playing the game when he was five years old and stopped at age 65. He played position of first base and his number was #16. Urie played on several teams including the Bridgeton City League, Vineland Baseball League, Vineland Puerto Rican League, Bridgeton Industrial League, and managed and played from 1967 - 1997 for the F&M Bank Team. On April 9, 2011, he was inducted into the Bridgeton Hall of Fame. Urie was a proud veteran of the U.S. Army, serving from 1952 – 1954. He was also a member of the Nanticoke Indian Association in Millsboro, Delaware. Urie was often seen having breakfast with friends at the McDonalds in Bridgeton. He was well known for always having a clean car. He was a big fan of music, listening to everything from Funk, R&B, Country, and 1950’s oldies. He loved the Phillies, Yankees, and most of all the Eagles. He is survived by his wife Helen, his daughter, Robin Benjamin of Bridgeton, his grandchildren, Urie Anderson and Leah Benjamin, several nieces and nephews who affectionately called him “Uncle June”, his baseball teammates and many, many, friends. Besides his parents, Urie was predeceased by his siblings: Eleanor Street, Sylvia Mitchell and Charles T. Morris. Family and friends are invited to attend services on Sunday, November 4, 2018 at 1:00 PM from the Sray-Webster Funeral Home, 62 Landis Ave, Bridgeton. Urie requested for everyone to attend in casual attire wearing baseball sports team apparel. A viewing will be held prior to services from 11:00a.m. till 1:00p.m. Interment will take place privately. Team members of F&M Bank are asked to meet at the Bridgeton Hall of Fame All Sports Museum, Burt Ave., Bridgeton immediately following the services. In lieu of flowers, the family asks donations be made to the Bridgeton Sports Hall of Fame,18 Burt Street Bridgeton, NJ 08302.

Urie M. Morris aged 86 years of Bridgeton, passed away suddenly on Saturday afternoon October 27, 2018 in Inspira Medical Center, Vineland. Born in Bridgeton, he was the son of the late Urie Ridgeway and Sara Morris, and the husband of Helen... View Obituary & Service Information

The family of Urie M. Morris created this Life Tributes page to make it easy to share your memories.