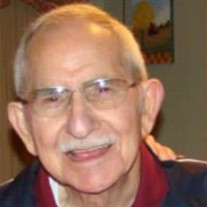 Rolando Piccioni, of Hopewell Township, passed away with his family by his side and under the care of Hospice early Tuesday morning November 19, 2019 at the home of his daughter. He was 90 years old. Born December 28, 1928, in Canale Monterano, Italy, he was the son of the late Luigi and Chiara Chiari Piccioni, and the husband of Nancy Rossi Piccioni. In September, Mr. and Mrs. Piccioni celebrated 59 years of marriage. They were long time area residents; residing on Bank Street for 28 years, then moving to Shiloh Pike where they lived for 29 years, and for the past three years residing with their daughter Mirella in Hopewell Township. Rolando immigrated to New Jersey in 1954, and worked for 22 years until their closing at Price Brothers Label Company. He then worked for Scott Paper for 15 years until his retirement in 1991. He enjoyed dancing, singing, playing Pinochle and Bocce Ball, and his frequent walks around the Bridgeton Raceway accomplishing 8 to 10 miles daily. He was a member of The Parish of The Holy Cross Immaculate Conception Church where he loved singing in the Choir. Rolando was a devoted husband and father, whose greatest love was being with his family. Surviving him besides his loving wife Nancy, is his daughter Mirella L. Piccioni of Hopewell Township, his sister Ines Piccioni, and several nieces, nephews, and friends. Besides his parents, he was predeceased by a brother Frank Piccioni, and sisters Maria Piccioni and Nella Piccioni. Family and friends are invited to attend services for Rolando on Friday November 22, 2019 at 11:00a.m. from the SRAY-WEBSTER FUNERAL HOME, 62 Landis Ave. at Carll’s Corner, Upper Deerfield Twp. A visitation will be held from 9:00a.m. till 11:00a.m. at the funeral home. The interment will take place privately in Overlook Cemetery, Bridgeton. In Lieu of flowers, the family asks that contributions be made to St. Jude’s Research 501 St. Jude Place Memphis, TN 38105.

Rolando Piccioni, of Hopewell Township, passed away with his family by his side and under the care of Hospice early Tuesday morning November 19, 2019 at the home of his daughter. He was 90 years old. Born December 28, 1928, in Canale Monterano,... View Obituary & Service Information

The family of Rolando Piccioni created this Life Tributes page to make it easy to share your memories.

Rolando Piccioni, of Hopewell Township, passed away with his...