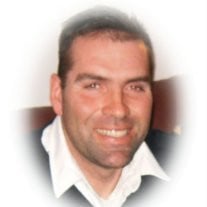 Robert H. Pyott, 48 of Glassboro, died suddenly Saturday September 21, 2013. He was employed as a corrections officer at the Federal Correctional Center in Fairton. He was a 1983 graduate of Cumberland Regional High School and a 1987 graduate of Rowan University. Robert was an avid horseman, had a keen sense of humor, and was a talented athlete. In high school he won numerous cross country and track awards including the Cumberland County Cross Country Championships. At Rowan University he continued to excel in both track and field and cross country in Division III competitions. After graduation he continued competing and winning running events in the Southern New Jersey. He eventually competed in area triathlons and completed an Ironman triathlon in Florida in 2011. Robert is survived by his parents Robert and Patricia Pyott of Rosenhayn; two sisters, Patricia Gale (Danny) of Heislerville, and Leanne Huebner (Kyle) of Manhattan Beach, California; one brother, John Pyott (Marilyn Rheiner) of Vineland; three nephews, two nieces, and his paramour, Nicole Wames of Glassboro. A Mass of Christian Burial will be celebrated on Friday September 27, 2013 at 12:00 p.m. from All Saints Parish St. John Bosco Church, 2 Hillcrest Ave. Millville, NJ. Interment will be held privately in Mount Hope Cemetery, Rosenhayn. Friends may call on Friday morning from 10:00 to 11:30 a.m. at the SRAY-WEBSTER FUNERAL HOME, 62 Landis Ave. Upper Deerfield Twp. In lieu of flowers, the family suggests donations in Robert’s name be made to Desert Waters Correctional Outreach, Whose mission is to increase the occupational , personal, and family well being of staff of all disciplines within the corrections profession. C/O 431 East Main St. P.O. Box 355 Florence, CO 81226.

Robert H. Pyott, 48 of Glassboro, died suddenly Saturday September 21, 2013. He was employed as a corrections officer at the Federal Correctional Center in Fairton. He was a 1983 graduate of Cumberland Regional High School and a 1987 graduate... View Obituary & Service Information

The family of Robert H. Pyott created this Life Tributes page to make it easy to share your memories.