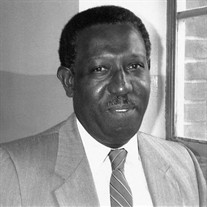 It is with great sadness that the family of Robert Bernard Dunn Sr. announces his passing after a brief illness on Thursday May 10, 2018, at the age of 86 years. Our joy is in the comfort of knowing that he was received in the arms of his heavenly Father, and he will be with his wife of 60 years, Mary Elizabeth, and his brother Milton, who recently passed on April 4, 2018. Robert, who was affectionately known as “Bob” was born on July 18, 1931 in Salem, NJ to Rebecca Ann Dunn and Garrison Sorrell. He was also predeceased by his son Robert B. Dunn Jr., his sister, Betty and his brother-in-law, Hannibal “Nick” Nichols. Bob completed his early education in the Salem School district. He attended Cheyney State Teachers College in 1949 where he had followed his cousin, Nathan Dunn, and where he met his life-long fraternal brothers Walter Moore, his roommate, and the late Thomas C. Lane IV. He later transferred and graduated from West Virginia State College with a BA in Physical Education. His fraternity brothers were a close-knit group who later became uncles to the Dunn children: Maxie McGrimmin and the late Donald Bowser, Harold “Sparky” Watts, Sylvester Slade, and Hannibal “Nick” Nichols. After graduating from college, Bob met Mary E. Nichols of Philadelphia through his fraternal brother, Nick. They later married and had three children from this union: Robert, Jr., Allison, and Robin and five grandchildren: Chad, Cydnee, John, Joshua and Angelica. Bob and Mary were married for over 60 years. That said, she was his Alpha-Omega sweetheart. When you saw Bob, you also saw Mary. They were a couple who could laugh and cry together because they always looked forward to the good times realizing, through their faith in God, that any storm would soon pass. His love for Mary was forever. As a family, we always enjoyed his many stories and “coming of age” tales about college life and his fraternal escapades while being president of his senior class. His influence encouraged all of his children, grandchildren and at least two of his nieces to attend historically black colleges. Bob began his teaching career at Gouldtown School alongside his fraternal brother, Thom. His career in education in Cumberland County spanned 41 years and he retired as the first black guidance counselor at Bridgeton High School. During his years of service, he taught and mentored many generations of the same family; most still have an inspiring word to say about his character and his on-going inspirational advice. For Bob, teaching and counseling were endeavors that he really enjoyed. “If I can give a student a push in the right direction, help him along the way, then I am doing that job that I love.” While Bob was active with his family and his career, he never slowed down with his extracurricular activities and civic responsibilities. He held many roles during his young adult years. He was a sports enthusiast who played second base for the Wesley’s softball league and who worked as an assistant coach for both the Bridgeton High School football and basketball teams. After hanging up his cleats, you may have heard him utter the words “batter-out” as an umpire for the various baseball and softball leagues in Bridgeton. He also found the time to be the first black employee at Morton’s Jewelers in Bridgeton for over 20 years. Some of his civic obligations included serving as a 14-year member and two-term president of the Fairfield Twp. Board of Education, a volunteer firefighter, a member and past president of the local Kiwanis Club, a board member for the Salvation Army and a dedicated member in his fraternity, Omega Psi Phi. Fraternally, Bob and Thom Lane were members of the “Original Nineteen” Beta Gamma Chapter, which was the Charter Line of Omega Psi Phi Fraternity Inc. at Cheyney State Teachers College in 1950 and also Charter members of The Beta Iota Iota Chapter of Omega Psi Phi Fraternity Inc. in Cumberland County. For several years, Bob served as Keeper of the Records for the local chapter and received their first Man of the Year award in 1996. Bob was a member of the Mt. Zion Baptist Church for over 55 years and sang on the men’s choir for a short time. He was serving as Trustee Board President until his health declined. He always enjoyed his fiscal responsibilities and service to the Lord. We remember him as a person who fought for what was right, honest and fair. He also often stated that, “When you put God first, everything else will fall in line.” He leaves behind to celebrate his legacy his daughters: Allison L. Dunn and Robin K. Coleman (Karl); grandchildren: Chad T. Dunn, Cydnee A. Speight (Kennard) , John R. Dunn, Joshua M. Dunn, and Angelica M. Coleman; sisters-in-law, Hattie Bainey and Dolores Nichols; nieces: Marsha Gresham, Lynn Williams (Tony), Faith Fisher-Bangoura (Mohamed), Lynne Saunders, Shawn Ferrell (Terrell), and Lillian King; nephews: Troy Nichols (Keisha) and Wayne Smith; and a host of cousins, fraternal brothers and extended family members and friends. Each and every one of us are better people having had you influence our lives. We already miss you Sorrowfully, Your loving Family

It is with great sadness that the family of Robert Bernard Dunn Sr. announces his passing after a brief illness on Thursday May 10, 2018, at the age of 86 years. Our joy is in the comfort of knowing that he was received in the arms of his heavenly... View Obituary & Service Information

The family of Robert B. Dunn Sr. created this Life Tributes page to make it easy to share your memories.

It is with great sadness that the family of Robert Bernard Dunn...