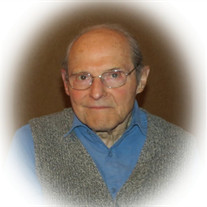 Bob Burton left this world suddenly on October 8, 2014, with his soul mate Carolyn by his side. He had been battling prostate cancer, and congestive heart failure, but the family had fully supported him though his health struggles. Robert James Burton was born in Bridgeton, NJ on February 5, 1933 to Frank and Marie (nee Patchell) Burton. He spent many happy years growing up with his siblings: Winnifred, Donald, and Willard, at the family homestead on Burlington Road. That is where his father started the family business, Frank Burton & Sons. Bob graduated from Bridgeton High School in 1951; however, started working at a young age with his dad as his father taught him the plumbing business. Around 1966 the business was moved to Shiloh Pike where it remains today. During that time period, Bob transitioned from plumbing to designing and building kitchens and bathrooms, truly becoming a master craftsman. In 1956 he married the love of his life, Carolyn Ewing, following which time Bob hand built their home in the country. Bob and Carolyn had three children: William, Patricia, and Thomas. His hobbies, in younger years, included boating and salt water fishing. Memorable family times were often shared while boating, and they often traveled down to the Chesapeake Bay area. He also enjoyed antique and classic cars, as well as antique gas and steam engines. He had been an active member of the South Jersey Gas & Steam Engine Club. Bob grew up in St. Andrew’s Episcopal Church worshipping with many members of the extended Burton family. As an adult he became a member of the vestry. Eventually Bob& Carolyn began attending the First Wesleyan Church in Upper Deerfield where he became an active member. Bob held different positions there as board member and trustee at various times. Always faithful to church, as health allowed, what mattered most to Bob was his personal relationship with his Lord and Savior Jesus Christ, and he was quick to share that need with others. Bob was a quiet man with a subtle witness and could always be found humbly washing dishes or cleaning up after church functions, no matter his own personal discomfort. And, many a phone call was made from his home to invite others to church services, special events, or Men’s Federated meetings. Additionally Bob & Carolyn were active members of the Gideons International, which distributes Bibles all over the world, for 20 plus years. Bob was a compassionate soul; he & Carolyn supported various children from poor countries for over 30 years. If asked, Bob would tell you he never did anything great but his family begs to differ because he did all that God asks by being a good and honest businessman, a loving and dedicated father, and a man who always put his Savior, his family, and others ahead of himself. He will be sorely missed by family and friends, but their loss is truly Heaven’s gain. Bob is survived by his wife of 58 years, Carolyn (nee Ewing), son Bill and his wife June, daughter Patty and her husband Bob, and son Tom and his wife Linda. He had six grandchildren: Laura Burton, Missy Burton, Melanie Garrison (Roger), Stephen Burton, Michele Evans, and Erin Hurff (Jason). Additionally he had four great grandchildren he adored: Mia Burton, Asher Garrison, Landon and Evelyn Hurff. He also leaves behind many nieces and nephews he greatly loved. A time of visitation will take place at the First Wesleyan Church, 200 Laurel Heights Drive, Bridgeton from 9 – 11 a.m. on Saturday, October 11, 2014 with the service following at 11:00 a.m. The interment will be in Overlook Cemetery, Bridgeton. In lieu of flowers the family requests donations be made to: The Gideons, Bridgeton Camp of Gideons, P.O. Box 476, Bridgeton, NJ 08302 or First Wesleyan Church, 200 Laurel Heights Drive, Bridgeton, NJ 08302.

Bob Burton left this world suddenly on October 8, 2014, with his soul mate Carolyn by his side. He had been battling prostate cancer, and congestive heart failure, but the family had fully supported him though his health struggles. Robert... View Obituary & Service Information

The family of Robert James Burton created this Life Tributes page to make it easy to share your memories.