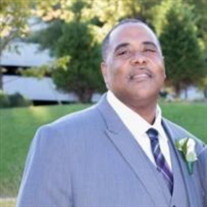 Richard Graves, 52 of Vineland, passed away Tuesday March 1, 2022 in Inspira Medical Center, Vineland after a lengthy illness. Born February 7, 1970 in Bridgeton, NJ he was the son of the late James and Alberta (Miller) Graves and was a lifelong resident of the area. Richie was a 1988 graduate of Cumberland Regional High School and he worked during his time in high school for Gia's Catering in Bridgeton where he adopted his love of cooking. He was employed for 25 years until his health began to fail as a Food Service Assistant Manager at the Fairton Correctional Institute. Richie had a love for sports, and served as a coach for the Vineland Midget Football League and the South Vineland Baseball League mentoring and teaching many young people along the way. He loved fishing, cooking for family and friends, and also golf. He was a New Orleans Saints fan and he loved just being with his family. Surviving him are his children: Richard Graves Jr., Shemar Peterson, Xavier Graves, and Myiah Graves; a brother, Duane Graves and his wife Jean Marie of Maryland, sisters, Tia Graves of Maryland, Iolanda Graves of Fairfield Twp., his extended brother and sister, Roy Calvin Graves and his wife Addie also of Maryland and Susan Lively of Fairfield Twp., his three grandchildren, Shemar Peterson Jr., Kayden Marshall, and Rolincio Graves, and many cousins and extended family. Besides his parents, he was predeceased by his sister in law Enid Graves. Family and friends are invited to attend funeral services on Saturday March 19, 2022 at 12:00pm from the SRAY-WEBSTER FUNERAL HOME 62 Landis Ave. at Carll's Corner, Upper Deerfield Twp. Interment will be in Fordville Memorial Park, Fairfield Twp. Friends may call on Saturday morning from 10:00am till 12:00.

Richard Graves, 52 of Vineland, passed away Tuesday March 1, 2022 in Inspira Medical Center, Vineland after a lengthy illness. Born February 7, 1970 in Bridgeton, NJ he was the son of the late James and Alberta (Miller) Graves and was a lifelong... View Obituary & Service Information

The family of Richard Graves created this Life Tributes page to make it easy to share your memories.