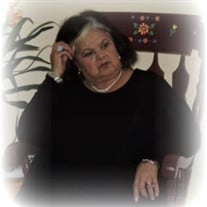 Phyllis L. Carter, 73 of Dover Delaware, passed away suddenly and unexpected on Monday morning February 16, 2015 at her home. Born in Greenwich, NJ she was the daughter of the late Ephraim and Rebecca (nee Loatman) Mosley, and the wife of the late Ralph H. Carter Jr., who passed in 2011. Phyllis grew up in Greenwich Twp., and had moved with her late husband to Delaware in 2005. She had also previously lived in Maryland for a number of years. She was formerly employed until her retirement, with the Gloucester County Public School system as an Administrative Assistant. A member of the Nanticoke Lenni Lenape Tribe of Bridgeton, she was very proud of her Native ancestry, and was instrumental along with her late sister, Betty, in the reorganization of the tribe in the late 70’s. She enjoyed playing the piano, knitting, doing needle work, crocheting and making Native American pieces for friends and family. She was very well known for her feistiness; however, respected for that attribute as well. She loved her family and time spent with her grandchildren. She is survived by her daughters; Tyrese Gould Jacinto and her husband Victor of Bridgeton, and Shana Gould of Fairfax, Virginia; two sisters, Sara P. Rainey of Hopewell Twp., and Marguerite Yoshikawa of Tacoma, Washington; eight grandchildren, Steffani Savoy-El, George Torres, Annalyse Cooper, Marcus Torres, Adam Torres, Nolan Branch, Taylor Branch, and Sean Torres; two great grandchildren and many nieces, nephews, cousins, friends and relatives. Besides her parents and her husband, Ralph, she was predeceased by a sister, Betty Jackson, and one brother, Ephraim Mosley Jr. Funeral services will be held on Saturday February 21, 2015 at 12:00 p.m. from the SRAY-WEBSTER FUNERAL HOME, 62 Landis Ave. at Carll’s Corner, Upper Deerfield Twp. Friends may call on Saturday morning from 10:00 -12:00p.m. prior to the services. The interment will be in Fernwood Memorial Park, Hopewell Twp.

Phyllis L. Carter, 73 of Dover Delaware, passed away suddenly and unexpected on Monday morning February 16, 2015 at her home. Born in Greenwich, NJ she was the daughter of the late Ephraim and Rebecca (nee Loatman) Mosley, and the wife of the... View Obituary & Service Information

The family of Phyllis L. Carter created this Life Tributes page to make it easy to share your memories.