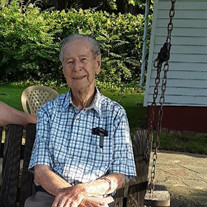 Norman C. Sanderlin Jr., of Bridgeton passed away Thursday afternoon November 7, 2019 in Inspira Medical Center Vineland where he had been a patient for the past three weeks. He was 88 years old. Born in Bridgeton March 29, 1931, he was the son of the late Norman C. Sr. and Hannah Mae (nee Haywood) Sanderlin. Norm as he was affectionately known, was a lifelong resident of the Bridgeton area. Norm was employed as a tank foreman for 35 years at Owens Illinois Glass Company until his retirement in 1984. He was a member of West Park United Methodist Church of Bridgeton and had also served as a Trustee of Overlook Cemetery Association. He enjoyed fishing, gardening, golfing, and was known never to be at a loss for words. He was always smiling and loved joking with anyone he met. He never knew a stranger. Norm also worked for several years as a funeral attendant for the Sray Funeral Home in Upper Deerfield Twp. He is survived by his brother Richard Sanderlin and his wife Josephine of Georgia, a sister Barbara Carbonneau and her husband Joseph of Florida, his nephews, David, Ronald, Wesley, and Richard Sanderlin, Rodney Wolf, and Donald Wulf, his nieces, Kimberly D’Apolito, Susan Armington, Joni Woodruff, Karen Wilson, and Becky Houk, and many friends. Besides his parents, Norman was predeceased by a brother Edward Sanderlin, two sisters, Nancy Raymond, and Shirley Wolf, and a niece, Kathy Picerno. Family and friends are invited to attend funeral services on Monday November 11, 2019 at 12:00p.m. from the SRAY-WEBSTER FUNERAL HOME, 62 Landis Ave. at Carll’s Corner, Upper Deerfield Twp.. Norm’s pastor Rev. David Strope will officiate. The interment will take place in Overlook Cemetery, Bridgeton. Friends may call on Monday morning from 10:00a.m. till 12:00p.m. prior to the services. In lieu of flowers, the family suggests donations be made to the West Park United Methodist Church 625 Shiloh Pike Bridgeton, NJ 08302 or to a charity of one’s choice.

Norman C. Sanderlin Jr., of Bridgeton passed away Thursday afternoon November 7, 2019 in Inspira Medical Center Vineland where he had been a patient for the past three weeks. He was 88 years old. Born in Bridgeton March 29, 1931, he was... View Obituary & Service Information

The family of Norman C. Sanderlin Jr. created this Life Tributes page to make it easy to share your memories.