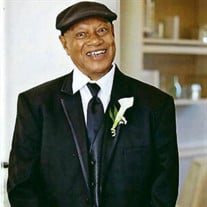 Nathaniel Thomas was born in a little house off of route 49 in Millville, New Jersey on February 22, 1929. He departed this life on December 30, 2021. He was affectionately known as Nat/Nate by family and friends. He was the son of Elease Thomas and William Edward Benton Sr. Nathaniel attended Paterson public schools. In addition, he attended Lincoln Technical Institute where he received a certificate of completion of automotive technology. After attending high school Nathaniel served his country domestically and overseas in Korea. In the army, he learned the trade of welding, which he continued in his civilian life. He was honorably discharged in 1953. He worked as a welder at the Bridgeton Iron Foundry and also at Air Work Corporation in Millville NJ for thirty-three years. In addition, Nathaniel actively served as a volunteer fireman at the Gouldtown Fire Company No. 2 from 1962 to 1982. Nathaniel holds the honor of a lifetime membership of 59 years at the fire company. Family and friends will remember the picnics across the street from the firehouse at Nathaniel and Elease’s home that were held for many years. He was loved and embraced by many. In fact, around the Gouldtown area, Nathaniel was considered the “Mayor” because of his helpful, comical and friendly manner. Good food was one of his loves. He also enjoyed having yard sales where many of his friends and family were always in attendance. Nathaniel spent much of his time with his friends, most of which, he truly considered family, like Rose and Josh Burton. Eli “Putt” Webster is one of Nathaniel’s favorite people in the world. Putt made his later years a lot sunnier. In the 1950s, Nathaniel enjoyed riding as a member of The Iron Horsemen motorcycle club of Paterson, NJ. In addition, he was a member of the Yellow Jackets motorcycle club of Gouldtown, NJ where in addition to riding, he participated with members of the bike club in activities that benefited the community. Nathaniel attended Trinity AME Church in Gouldtown, NJ. Nathaniel married Elaine Burger-Thomas- Foubister and later married Mildred Thomas-Taylor. He was preceded in death by his loving mother, Elease Thomas Sistrunk, his son, Nathaniel Thomas Jr., his brothers, John Thomas and William Edward Benton Jr., his sister, Elizabeth Frizby, and his granddaughter, Jasmin Butterfly Thomas. Nathaniel is survived by his children; Shirley Broomes of Georgia, Jacqueline Thomas of Georgia, Sabrina Maine of Georgia, Anthony Thomas of Millville, NJ and Etoy Thomas of Millville, NJ., in addition to 12 grandchildren, 17 great grandchildren, and a host of relatives and friends. A special note: Nathaniel’s daughter, Sabrina Thomas Maine, passed away the morning of January 12, 2022. He and Sabrina have gone on to be with the Lord. They will be missed.

Nathaniel Thomas was born in a little house off of route 49 in Millville, New Jersey on February 22, 1929. He departed this life on December 30, 2021. He was affectionately known as Nat/Nate by family and friends. He was the son of Elease Thomas... View Obituary & Service Information

The family of Nathaniel Thomas created this Life Tributes page to make it easy to share your memories.

Nathaniel Thomas was born in a little house off of route 49 in...