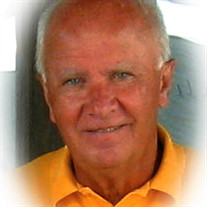 Myron (Max) Murasky Jr. 79 of Upper Deerfield Twp. passed away peacefully at home on Friday November 13, 2020 amongst family after a long struggle with Parkinson’s Disease and Dementia. Max was born in Bridgeton, NJ on October 1, 1941 to Mary (Gult) and Myron Murasky Sr.. He attended Bridgeton High School and graduated from Woodstown High School in 1960. Before beginning college, he worked for Owens Illinois for one year, and continued to do so during future summer months. In 1965 Max graduated from Glassboro State College with a Bachelor of Arts Degree. He married Janet Leonard in 1966, whom he met while in college. Max gained employment through the Moore School in Upper Deerfield Twp. and taught 8th grade math and science from 1965-1973. During this time , he obtained his Master of Arts Degree. He then transferred to Lower Alloways Creek and taught there from 1973-1981. Throughout Max’s teaching career, he also sold real estate through Robert Weber and was a bank teller with Farmers and Merchants Bank. In 1981, his career path changed when accepting a job with Bechtel Power Corporation, relocating with his family to Kennewick, Washington, and then to Lawrence, Kansas in 1984. His final career change landed them back to New Jersey when accepting a position as senior purchasing agent for Mannington Mills. He worked there for 20 years, retired in 2006, and enjoyed many years as a part time babysitter for his grandchildren. Max was known for his generosity, his dry wit, and his unfailing sharp memory. He enjoyed playing tennis, was an avid music and movie enthusiast, and found the best deals at yard sales and Goodwill, always eager to share with others. In his younger years, he was very skilled at playing violin and had a keen ear for the piano as well. Max was an active member and Elder of Deerfield Presbyterian Church for over 45 years, serving on the property committee, and various other committees throughout the years. Max was also part of the Salem Main Street Program, as a liaison for Mannington Mills. Max is survived by his loving wife of 54 years, Janet (Leonard) Murasky, his children, Andrew Murasky and his wife Jennifer of Thousand Oaks, California, Jill (Murasky) Mossbrooks and her husband Moe of Bridgeton, and Jaclyn (Murasky) Pohlig of Brigantine, NJ, his seven grandchildren, David and Patrick Murasky, Max and Philip Mossbrooks, and Anna, Ingrid, and Maeve Pohlig, a brother Dennis Murasky and his wife Jane of The Villages, Florida, his sister Ginny (Murasky) Buono and her husband Anthony of Bridgeton, NJ along with many nieces and nephews. The church and his faith were of great importance in his life. A Memorial Service will be held on December 12, 2020 at 1:30 pm from Deerfield Presbyterian Church 530 Old Deerfield Pike, Bridgeton, NJ. A visitation will be held from 1:00 till 1:30 service time. If so desired, Memorial Gifts may be sent to Deerfield Presbyterian Church, Property Committee, PO Box 69 Deerfield Street, NJ 08313.

Myron (Max) Murasky Jr. 79 of Upper Deerfield Twp. passed away peacefully at home on Friday November 13, 2020 amongst family after a long struggle with Parkinson&#8217;s Disease and Dementia. Max was born in Bridgeton, NJ on October 1, 1941... View Obituary & Service Information

The family of Myron Max Murasky Jr. created this Life Tributes page to make it easy to share your memories.