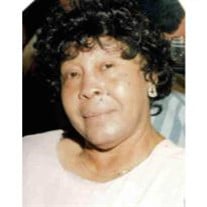 Mary S. Justice, 78 of Bridgeton, died Wednesday evening November 28, 2007 in the Regional Medical Center, Vineland. She had been a patient there for two days. Born in Pulaski, Georgia, she was the daughter of the late Otis and Olivia nee Sherrod Sapp. She had formerly been a longtime resident of Fairfield Twp.. Mary was retired from Foster Forbes in Millville and had previously worked at Anchor Hockings Glass Company in Salem. She had twenty five years of service between the two factories, before her retirement. She also worked after her retirement at the Cumberland Manor in the Social Services Dept. She was a forty five year member of the Revival Fellowship Church, where she served as a Devotional Worship Leader. Mary had a special ministry providing for families who were less fortunate. She would cook and prepare meals in her home in Fairfield Twp. and deliver them to the needy. She also loved to spend time and visit the sick at nursing facilities and in the hospital. She was also a member of the Fairfield Twp. Senior Center. Surviving her is one son Rev. Sylvester Lang and his wife Gloria of Savannah, GA, two daughters, Mary Jane Planter and her husband Rudolph of Bridgeton, and Alice Hobbs and her husband Bobby of Brunswick, GA, one brother Walter Sapp of Metter, GA, three sisters Dora Palmer of Bridgeton, Inez Watts of Miami, Fla., and Bertha Proctor of Brunswick, GA , four grandchildren Monica Hobbs, Aliza Hobbs, and La'Kesha Hobbs all of Brunswick, GA, and Lacey Livingston of Bridgeton, and four great grandchildren Marque'l Cummings, Aleesha Hobbs , Alfred Holmes Jr. all of Brunswick, GA and Laceyean Livingston of Bridgeton. She was predeceased besides her parents by her son Willie E. Sapp, four sisters, Leda Banks, Gertrude Lovette, Pearline Maddox, Louise Sapp, and one brother Rollins Sapp.

Mary S. Justice, 78 of Bridgeton, died Wednesday evening November 28, 2007 in the Regional Medical Center, Vineland. She had been a patient there for two days. Born in Pulaski, Georgia, she was the daughter of the late Otis and... View Obituary & Service Information

The family of Mary S. Justice created this Life Tributes page to make it easy to share your memories.