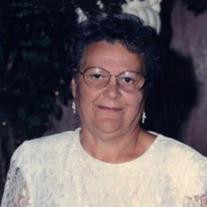 Marion E. Mosley 83, of Fairfield Twp. made her journey home to be with the Lord , on Saturday August 4, 2012 in South Jersey Extended Care, Bridgeton. Born on August 9, 1928 in Fairfield Twp., she was the daughter of the late Irving and Helen (nee Gould) Fisher. Marion attended grade school in the Gouldtown School and graduated from Bridgeton High School in 1946. She was employed with MC Schrank, Jersey Packing, Mark Manufacturing, and lastly Major Clothing where she retired in 1990. On April 17, 1948, Marion married the Love of Her Life the late David Mosley III, they were married for 50 years. During this union they had two wonderful sons, Ronald and Keith. Marion was always on the go, she loved yard sales, traveling, visiting with friends, talking on the phone, singing and attending Usher Anniversaries. Marion joined Trinity A.M.E. Church, Gouldtown at the age of 19, and was active until the founding of the Bethany Christian Church in Bridgeton. She was a member of the Senior Choir, Stewardess Board, Missionary Society, Senior Usher Board, Sunday School, and the Director of the Junior Choir. Marion could be seen for many years, loading up her station wagon picking up the children and taking them to choir rehearsal and church. She was active on the boards until her health failed , but she still kept going and giving directions from her seat. In her passing, she will be truly missed as she leaves to cherish her memory, her sons Ronald (Beryl) of Fairfield Twp., Keith (Karen) of Muncie Indiana, five grandchildren Michelle (Linvall) Lewis, Brooke (James) Moore, Colby, Corey, and Michelle (Edmond) Fry. One sister Marcella (Louis) Harmon of Fairfield Twp., two sister in laws, Flora Fisher and Mary Fisher, five great grandchildren, two God children Araminta Carney, and Darryl Harmon, a host of nieces, nephews, relatives and friends. Besides her parents and husband, Marion was predeceased by two brothers Donald Fisher and Irving Fisher. Family and friends are invited to attend funeral services on Thursday August 9, 2012 at 12:30 p.m. from the Bethany Christian Church, 80 South Burlington Road, Bridgeton, NJ. The Rev. Louis Harmon will officiate. Interment will be in Gouldtown Memorial Park, Fairfield Twp. Friends may call on Thursday morning from 10:00 to 12:30 p.m. at the church, prior to the services.

Marion E. Mosley 83, of Fairfield Twp. made her journey home to be with the Lord , on Saturday August 4, 2012 in South Jersey Extended Care, Bridgeton. Born on August 9, 1928 in Fairfield Twp., she was the daughter of the late Irving... View Obituary & Service Information

The family of Marion E. Mosley created this Life Tributes page to make it easy to share your memories.

Marion E. Mosley 83, of Fairfield Twp. made her journey home...