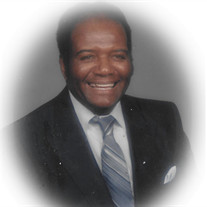 Marion Jacobs was born August 13, 1926 to the late Peter Jacobs and Pearlie Mae Reddick in Claxton, Georgia. Marion departed this life on March 19, 2019 at the Inspira Medical Center in Vineland, NJ. Marion received his early education in Georgia. Marion and his family migrated to New Jersey in 1942. Marion accepted Jesus Christ as his personal savior and before becoming ill he frequently fellowshipped at Faith Tabernacle on Grove Street in Bridgeton, NJ under the leadership of Pastor Arneta Finney. He also attended Pittman Roads Church of Christ with his daughter Barbara under the leadership of Minister Dan Cooper. Marion was always a hard worker and held various jobs in his lifetime. He was also an entrepreneur; he ran his own produce truck and sold fresh fruits and vegetables from his truck for many years in Delaware and the surrounding areas. Marion retired from Ernest DiSabatino and Sons Construction after 30 years of dedicated service. Marion was well known and loved by many. He loved to travel and for many years, he would take his yearly road trip to Florida to visit his many family members and friends. He would hit as many destinations as he could between Delaware and Florida to make sure he paid a visit to all his loved ones. Marion loved to landscape and plant a garden. He was known to help his family and friends spruce up and beautify their yards each year. He could always give you a life lesson with one of his stories. He was a man of wisdom and kindness. If you ever had a conversation with Marion, one of his favorite sayings was “Have a Good day today, and a better day tomorrow!” Marion was joined in holy matrimony in 1991 to the late Adrean Hendricks Jacobs and they were married until Adrean was laid to rest in 2015. Marion is also survived by a devoted special friend, Ann Bryant and a devoted friend he considered as a sister, Lucy Fair. Marion was a loving father and leaves to cherish his memories his children, Geraldine Morrell, Marion Jacobs, Jr., Barbara Robinson, Larry Robinson (Carolyn), Lonnie Robinson, Deborah Bryant, Sandra Simmons (Jeffrey), Marion Clark (Dana), Anthony Jacobs, Martha Wilson, and Alicia Thompson. He was also stepfather to Gloria Jean Davis, Rita Burton, Phyllis Grady, Roberta Thompson, Elaine Francis (Matthew), Michael Hendricks (Patricia), Wayne Hendricks (Nina) and Eugene Raymond Hendricks. Marion was a loving brother and leaves to cherish his memories are his brothers; William Jacobs, Pete Jacobs, Jesse Jacobs, Calvin Jacobs, and his sisters; Pearlie Mae Clark (J.C.), Elizabeth Pennington, Nancy Shields, Patricia Lewis, and Elise Williams. Marion was also a loving grandfather and leaves to cherish his memories 19 grandchildren and 26 great-grandchildren. He also leaves to cherish his memories numerous nieces, nephews, cousins and friends. In addition to his parents, Marion was predeceased by his daughter, Toyia Thompson, grandson; Carlton Fleeks, brothers; Charlie Jacobs, James Jacobs, Norris Jacobs, Lovest Jacobs and sisters; Ruby Pearl Green and Mary McMillian.

The family of Marion Jacobs created this Life Tributes page to make it easy to share your memories.