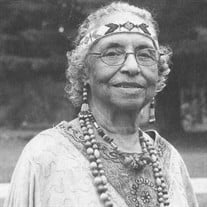 Marion D. Gould, aged 94 years, passed away late Friday evening October 28, 2016 at the home of her caregivers, Mark and Jennifer Boardley, in Bridgeton. Born in Bridgeton, she was the daughter of the late William H. Jr. and Mildred E. (nee Pierce) Purnell, and the wife of the late Wilbert Gould who passed away in 2005. Marion and her husband, Wilbert, owned and operated their own construction company and built many homes in the area. She also worked for many years as a Building Inspector for Fairfield Twp., and was previously employed as a Modernization Coordinator for the Atlantic City Housing Authority. Marion was a former member of the Order of the Eastern Stars and a member of Bethany Seventh Day Adventist Church in Bridgeton. She was also a member of the Nanticoke Lenni Lenape Indian Tribe of Bridgeton where she was given her name “Strong Medicine”, being the natural teacher, healer, and nurturer as she was. An oral history of her life was written in 2005 entitled “Strong Medicine Speaks” A Native American Elder Has Her Say. She was like an encyclopedia of Native knowledge when it came to natural herbs, medicines, and healing. She was very proud of her history, her people, and especially her family. She is survived by her two sons, Wilbur W. “Billly” Gould and his wife Ivonne of Fairfield Twp., and Chief Mark M. “Quiet Hawk” Gould and his wife Gail of Quinton Twp., six grandchildren, 20 great grandchildren and 5 Great Great grandchildren, and several nieces, nephews, extended relatives, and tribal family. Besides her parents and husband Wilbert, she was predeceased by her son, Jared J. “Jeffrey” Gould, a brother, Boyer Purnell, and her sister, Diane Purnell Trusty. Family and friends are invited to attend funeral services on Sunday November 6, 2016 at 12:00p.m. from the SRAY-WEBSTER FUNERAL HOME, 62 Landis Ave. at Carll’s Corner, Upper Deerfield Twp. A viewing will be held from 10:00a.m. till 12:00p.m. at the funeral home. Interment will be in Gouldtown Memorial Park, Fairfield Twp.

Marion D. Gould, aged 94 years, passed away late Friday evening October 28, 2016 at the home of her caregivers, Mark and Jennifer Boardley, in Bridgeton. Born in Bridgeton, she was the daughter of the late William H. Jr. and... View Obituary & Service Information

The family of Marion D. "Strong Medicine" Gould created this Life Tributes page to make it easy to share your memories.