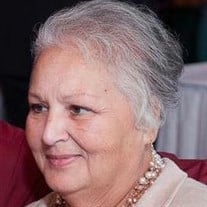 Maria Rebecca Jones, “Becky” aged 73 years, of Vineland and formerly of Fairfield Twp. passed away suddenly and unexpected on Monday March 26, 2018 in the NJ Veterans Memorial Home where she had been a resident for not quite a year. Born in Pittsburgh, California on July 13, 1944, she was the daughter of the late Miguel and Deluvina (nee Garcia) Lucero, and the wife of LeRoy C. Jones Jr. She and her husband would have celebrated 54 years of marriage this coming May. Becky grew up in California where she met LeRoy while he was stationed there in the Marine Corps. She and her husband had also previously lived in Connecticut prior to moving to this area in 1972. Becky was employed for 27 years as a Nurse’s Aide at Cumberland Manor, and was a member of the Parish of the Holy Cross, St. Theresa of Avila RC Church. She loved swimming and doing water aerobics and was a long time instructor at the former Wave Maker 4 Swim Club in Lower Alloways Creek. She was a member of the Nanticoke Lenni Lenape Indian Tribe, and for many years she could be seen helping in the kitchen at Pow Wows; she and her husband assisted with the Frye Bread. She loved her family, and was a wonderful devoted wife, mother, grandmother, sister, and friend to all. She is survived by her husband LeRoy, her children: Theresa Carney and husband Mark , David Jones and wife Michele all of Fairfield Twp., Greg Jones and his wife Marianne of Bridgeton, LeRoy Jones and wife Maria of North Augusta, South Carolina, brothers and sisters: Ruby Cordoba, Juanita Dabi, Alamay Siino and husband Joe, Jerry Lucero, Theresa Lopez all of California, 8 grandchildren: Danielle Browning, Ashton Lanning, Eriana McRimmon, Amber Jones, Marc Jones, Kameran Jones, Michael Jones, and Elaina Jones, 3 great grandchildren: Isabella Hildreth, Lane Browning, and Shane Browning, and many nieces, nephews, cousins and other relatives. Family and friends are invited to attend funeral services at 12:00p.m. March 31, 2018 from the SRAY-WEBSTER FUNERAL HOME, 62 Landis Ave. at Carll’s Corner, Upper Deerfield Twp. The interment will be in the family plot in Cedar Hill Cemetery, Cedarville. Friends will be received from 10:30 till noon at the funeral home, prior to services.

Maria Rebecca Jones, &#8220;Becky&#8221; aged 73 years, of Vineland and formerly of Fairfield Twp. passed away suddenly and unexpected on Monday March 26, 2018 in the NJ Veterans Memorial Home where she had been a resident for not quite... View Obituary & Service Information

The family of Maria Rebecca Jones created this Life Tributes page to make it easy to share your memories.