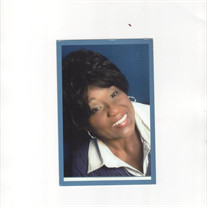 On the morning of Monday, June 13, 2022, Lucille Grace Dunkins (nee Butler) transitioned from this life to be with the Lord after a short illness, in McKinney, Texas, at the age of 83. Lucille was born in Bridgeton, New Jersey on November 25, 1938. She was the daughter of the late Daniel Carlton Butler, Sr. and Panzye Donaldson Butler. Lucille married James Harrison Dunkins on February 4, 1955 in Elkton, Maryland, and they remained happily married for forty-four years until his death. Lucille was educated in the Bridgeton Public Schools and later graduated as a Certified Nursing Assistant. In her younger years, Lucille was employed in a variety of jobs. She worked at the Cumberland Nursing Home in Bridgeton, New Jersey and at the American Institute of Mental Studies (AIMS) in Vineland, New Jersey. Her longest period of employment was at the Vineland State School in Vineland, New Jersey where she worked as a Nurses Aide. She retired from there after twenty years of employment to give care to her husband. Her last place of employment after retirement was the Rainbow Nursing Home in Bridgeton, New Jersey. As a child, she attended Union Baptist Temple in Bridgeton, New Jersey. After she was married, she and her family attended Faith Chapel in Bridgeton, New Jersey and was also a long-time member of the New Hope Baptist Church in Cedarville, New Jersey. Lucille became a member of Shiloh Baptist Church, under the leadership of her son, Rev. Dr. James A. Dunkins, in 1988, where she served faithfully in several ministries: She was an Usher, a Missionary, served on the Kitchen Committee, was a part of the Shiloh Family Services, which was the Food and Clothing Pantry, helped organize the Annual Thanksgiving and Christmas Basket Give-aways, and she was faithful in sending out correspondence to the sick and shut in. She enjoyed fellowshipping with a special group of women at the church called, “The Birthday Club”, and their agenda was to eat and shop. Lucille received several honors including an award for community service from the Greater Vineland Branch of the NAACP. She leaves to cherish her memory: Her loving children – Jacqueline Johnson (Ardes) of McKinney, Texas, Rev. Dr. James A. Dunkins (Marsha) and Dennis Dunkins (Nita) both of Millville, New Jersey, sisters – Marcella Rowe of Newfield, New Jersey, Delores Frain of Atlanta, Georgia and Janice Sease (Willie) of Bridgeton, New Jersey, fourteen grandchildren, twenty-eight great-grandchildren and a host of nieces, nephews, cousins and friends that love her dearly. She was predeceased by her parents, Daniel C. Butler and Panzye Donaldson Butler, her loving husband, James H. Dunkins, two daughters, Diane Dunkins and Donna Bard, four brothers, Edwin, Daniel, George and Donald Butler, and one sister, Charlotte Cole. Services will be held on Friday, June 24, 2022 at the Shiloh Baptist Church, Port Norris, New Jersey at 12:00 noon. There will be a 9:00am to 12:00 pm viewing. Services are entrusted to SRAY WEBSTER FUNERAL HOME, Bridgeton, NJ. Interment will be at the Cedar Hill Memorial Park, Hopewell Township, New Jersey.

On the morning of Monday, June 13, 2022, Lucille Grace Dunkins (nee Butler) transitioned from this life to be with the Lord after a short illness, in McKinney, Texas, at the age of 83. Lucille was born in Bridgeton, New Jersey on November... View Obituary & Service Information

The family of Lucille G. Dunkins created this Life Tributes page to make it easy to share your memories.