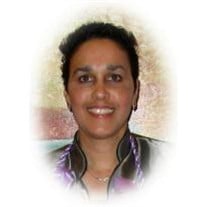 LuAnn Echevarria, 46 of Millville, passed away early Monday morning April 30, 2012 at home, under SJH Hospice care, surrounded by her family. She had been seriously ill since December. Born in Bridgeton, she was the daughter of Luther S. and Ivanette I. nee Mosley Pierce, and the wife of Edwin Echevarria. LuAnn and her husband Ed, have been residents of the Millville area for the past 22 years. LuAnn grew up in Deerfield Twp. and was a graduate of the Cumberland Regional High School Class of 1983. After high school she attended and graduated from Cumberland County College in 1988 as a Registered Nurse. She then pursued her Bachelor of Science in Nursing at the University of Delaware graduating in 2003, and her Masters of Science in Nursing in 2011, where she excelled in her studies and was a member of the Sigma Theta Tau International Honor Society. LuAnn worked for South Jersey Healthcare for the past 25 years, starting in 1987 in the former Millville Hospital, Oncology Dept. and was currently the Director of Children's Behavioral Health Services. LuAnn and her family were devoted members of the Bridgeton Assembly of God Church, where she worked diligently with the Girls Group Missionettes for the past 19 years. She and her husband were also instrumental in starting the Spanish Congregation in the church. LuAnn was also a proud member of the Nanticoke Lenni Lenape Indian Tribe of Bridgeton. She was a dedicated worker, a loving wife and mother, and a wonderful daughter, whose smile will be missed by all. Surviving her besides her husband Edwin of 25 years, are her parents, Luther S. Jr. and Ivanette I. Pierce, her mother in law Dionisia Echevarria, her two children, Dionisia Echevarria and Antonio Echevarria both at home, her sister Cathy Zehrung and her husband David of Silverton, Oregon, and her brother Luther S. Pierce III and his wife Dawn of Deerfield Twp, a niece Danielle Zehrung, and nephew Luther Pierce IIII and many aunts, uncles, nieces, nephews, cousins and various relatives and friends.

LuAnn Echevarria, 46 of Millville, passed away early Monday morning April 30, 2012 at home, under SJH Hospice care, surrounded by her family. She had been seriously ill since December. Born in Bridgeton, she was the daughter of Luther... View Obituary & Service Information

The family of LuAnn Echevarria created this Life Tributes page to make it easy to share your memories.