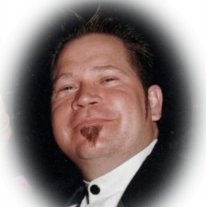 Joseph Russo, aged 48 years, of Bridgeton, NJ passed away suddenly on Friday November 29, 2013 in Cooper University Medical Center, Camden. Born in Long Branch, he was the son of Anna (nee April) Russo and the late Thomas Russo. Joseph was a true Jersey Boy growing up at the shore, and spending as much time there as possible. He was a chef by trade, and had worked at several restaurants including his position as manager at Martell’s in Point Pleasant Beach for 15 years. He also previously owned two restaurants of his own, Russo Brothers Pizza in Vineland, and Russo’s Pizza in Long Branch. He truly loved his work but his real passion was for his two sons, which everything in his life revolved around. He loved every minute spent with them and they were his life. Surviving him besides his mother Anna, are his two sons, Hunter Joseph Russo and Gage Thomas Russo; his siblings, Tish Russo, Mary Boyce, Frank Russo and his wife Cindy, Fran Raymond and her husband George, and Anna Newman and her husband Bruce; his former wife and best friend, Tammy DeMasse; brother in law, Larry DeMasse III; his mother and father in law, Larry DeMasse Jr. and wife Drema; and several nieces, nephews, cousins and various relatives. He will be truly missed by many. He was predeceased besides his father Thomas, by his brother, Thomas Russo Jr. in 2008, and sister, Sharon Kwiathrowki in 2006. Family and friends are invited to attend funeral services on Tuesday December 3, 2013 at 12:00 p.m. from the SRAY-WEBSTER FUNERAL HOME, 62 Landis Ave. at Carll’s Corner, Upper Deerfield Twp. Cremation and inurnment will take place in Camden County Crematory. Friends may call on Tuesday morning from 10:00 to 12:00 p.m. at the funeral home prior to the services. In lieu of flowers, the family asks that donations be made to his sons in order to set up a scholarship fund. Please make donations to Hunter and Gage Russo, c/o Tammy DeMasse, 4 Weber Road, Bridgeton, NJ 08302.

The family of Joseph Russo created this Life Tributes page to make it easy to share your memories.