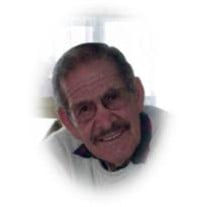 Herbert H. 'Brown Beaver' Pierce, 80 of Fairfield Twp. died peacefully Friday afternoon October 12, 2007 at the home of his daughter Frances Durham in Greenwich Twp. He had been in failing health for the past six months. Born in Greenwich, the son of the late Jediah and Mabel nee Dunn Pierce he was the husband of the late Rebecca nee Dean Pierce. Uncle Herb, as he was affectionately called by many was a union carpenter, formerly employed with Local 121 and had worked for many years on the Artificial Island in Lower Alloway Creek. He taught blue print reading and design at the Cumberland County Vo-Tech School for four years and volunteered at the Cumberland Manor for over twenty five years. He was a long time member of the First Church of the Nazarene, where he was a former Sunday School Teacher, and volunteered at The Bridge, the church thrift store in Bridgeton. Herb served on the Board of Directors for the Main Street Association in Bridgeton. He was a former member of the planning board of Fairfield Twp and formerly served as zoning officer, he also was a former member of the Fairfield Twp. School Board. He was very active in township politics and served on the Fairfield Twp. Republican party. He was a veteran of the U.S. Army serving during World War II, and a proud member of the Nanticoke Lenni Lenape Indian Tribe, where he served currently on Tribal Council. Uncle Herb was proud to be appointed liaison to the Carpenters Committee for the Turtle Associates, a construction company recently formed by the tribe. He also served on the by – law committee for the tribe, and was known for opening every meeting with council with the prayer circle. In his younger years he was also formerly employed with Woodruff Oil Company. He enjoyed deer hunting and fishing and spending time with his family, and his tribal family at the Indian Center. Surviving him are his five children, Herbert H. Pierce Jr. and his wife Sarah of Mannington, Jesse C. Pierce of Cedarville, Timothy J. Pierce and his wife Marjorie of Fairfield Twp., Frances Durham of Greenwich Twp., and Diane E. Gould and her husband Felton of Hopewell Twp., two brothers Ralph Pierce and his wife Doris and Alvin Russell Pierce all of Fairfield Twp., twelve grandchildren and twelve great grandchildren. He was predeceased besides his parents and wife by one son Todd W. Pierce, and six brothers Henry Dunn, James Pierce, Morris Pierce, Earl Pierce, Charles Pierce, Francis Pierce, and one sister Helen Pierce.

Herbert H. 'Brown Beaver' Pierce, 80 of Fairfield Twp. died peacefully Friday afternoon October 12, 2007 at the home of his daughter Frances Durham in Greenwich Twp. He had been in failing health for the past six months. Born in Greenwich,... View Obituary & Service Information

The family of Herbert H. Pierce created this Life Tributes page to make it easy to share your memories.