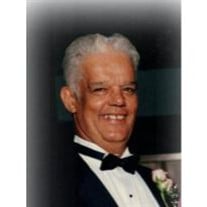 Harold D. Mosley Sr., 76 of Quinton Township, passed away suddenly, Thursday afternoon in Salem Memorial Hospital, Mannington Twp. His death was unexpected. Born in Quinton, NJ he was the son of the late Phillip H. and Beatrice C. nee Durham Mosley, and the husband of the late Nina M.nee Crotts Mosley, who passed away in 2007. Harold had worked for Wheaton Glass Company for 33 years as a mold maker, until his retirement on April 1, 1997. His family was his joy, and he raised his children with a lot of hardwork, laughter, tears and inner strength. He loved to garden, and always said "nothing tastes better than home grown". He enjoyed his wood working and making rocking chairs for his grandchildren. He loved watching good western movies and listening to country music. Harold loved spending time with his family at their gatherings and was always ready to share something funny with them. He loved a good deal or bargain and a good story told either by him or to him. He lived well, laughed often and loved much. Dad will be greatly missed. Harold is survived by his seven children Harold D. Mosley Jr. and his wife Julie, Pamela Ridgway and her husband Allan, Angela Peterson and her husband Lee, Teresa Kidwell and her husband Johnny, Cynthia Webster and her husband Shawn, Alesia Carney and her husband Bill, and Marisa Irizarry and her husband Albert, his three brothers Tony Mosley, Raymond Mosley, Bruce Mosley, his two sisters Betty Durham and Patricia Hughes, twelve grandchildren, fifteen great grandchildren, and several nieces, nephews and cousins. Besides his parents and wife Nina, he was predeceased by four brothers Phillip Mosley, Donald Mosley, Gary Mosley, Charles Mosley, and three sisters Barbara Moore, Carol Carney, and Mary Lou Mosley.

The family of Harold D. Mosley created this Life Tributes page to make it easy to share your memories.