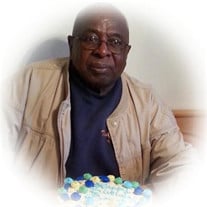 George A. Webster, of Pittsgrove Twp. and formerly of Fairfield Twp., passed away suddenly on Sunday January 19, 2020 in Eagleview Health and Rehabilitation where he had been a resident since December. He was 90 years old. Born in Bridgeton, he was the son of the late Raymond and Eleanor (nee Price) Webster, and the husband of Almeda (nee Gould) Webster. He had been an area resident all of his life. George or “Count” as he was affectionately known, was a veteran of the US Army where he proudly served his country as a fleet mechanic. After his discharge, he worked in the trucking fleet industry as a diesel mechanic working for the former Cross Transportation Company and the former Rollins Leasing Company at Seabrook Farms. After retiring, he worked as a Corrections Officer at Bayside State Prison until the age of 87. He enjoyed coin collecting and was an avid Star Gazer and Astronomer, often traveling early in the morning to Bay Point with his telescope to observe the sky. He also enjoyed going to air shows, and baking his famous pies for his family and friends. Count is survived by his wife Almeda, his two daughters, Kathy Charleston and her husband Ron of Vineland, and Karra Green and her husband James of Millville, a brother, Leroy Webster and wife Marietta of Vineland, his sister, Amelia Butler of Bothell, Washington, eight grandchildren, Erik Jenkins, Tiffany Dairsaw, George Gould, Karra Jenkins, Reginald Webster, Marshall Webster, James E. Green III, Issac Nelson Green, eleven great grandchildren, Elijah Dairsaw, Asia Dairsaw, Destiny Puccio, George Gould Jr., Cheyenne Gould, Andre Jenkins, Anthony Jenkins, Gianna Jenkins, Kaitlynn Jenkins, Erik Jenkins, and Kareem Jenkins. Besides his mother and father, her was predeceased by his son George A. Webster Jr., and his siblings, Alva Scott, Raymond Webster, Mary Stanford, Eleanor Drakes, Donald Webster, William Webster, and John Robinson. Family and friends are invited to attend funeral services on Monday January 27, 2020 at 11:00a.m. from the SRAY-WEBSTER FUNERAL HOME, 62 Landis Ave. at Carll’s Corner, Upper Deerfield Twp. The interment with military honors will be in the Cumberland County Veterans Cemetery, Hopewell Twp. A visitation will be held at the funeral home from 10:00 a.m. till 11:00a.m. prior to the services. The family requests, in lieu of flowers, donations in George’s memory be sent the Glassboro Church of God PO Box 420 Glassboro, NJ 08028.

George A. Webster, of Pittsgrove Twp. and formerly of Fairfield Twp., passed away suddenly on Sunday January 19, 2020 in Eagleview Health and Rehabilitation where he had been a resident since December. He was 90 years old. Born in Bridgeton,... View Obituary & Service Information

The family of George A. Webster created this Life Tributes page to make it easy to share your memories.

George A. Webster, of Pittsgrove Twp. and formerly of Fairfield...