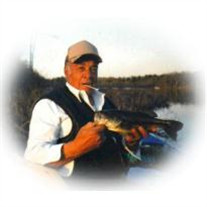 Elmer C. "Jim" Munson Sr. of Fairfield Twp. passed away late Friday evening April 1, 2011 at home with his family by his side. He had been in declining health for the past year. Born in Fairfield Twp. he was the son of the late Thomas and Carolyn nee Gould Munson and the husband of the late Beatrice nee Loatman Munson, who passed away in 2009. Jim had been an area resident for most of his life, but had also lived in Marlton, Millville, and Cedarville. Jim had worked for 35 years as an HVAC Installer for Woodruff Oil Company along with his brother Raymond, together throughout those years they had meticulously installed hundreds of home heating and air conditioning units in the area. After retirement, he worked at Trump Plaza for 10 years as an operator of the employee elevator. In his younger years he had also worked at the former Star Fertilizer Plant in Bridgeton. He loved hunting and fishing and was one of the founding members of the 20 Stag Gun Club. He was a member of the Nanticoke Lenni Lenape Indian Tribe of Bridgeton and was a familiar face, volunteering to pick up food and canned goods for the gleaning program for the seniors. He and his late wife enjoyed traveling and he always had a garden with which he took much patience and pride. He was a simple man, who enjoyed what life had to offer him, and he especially enjoyed spending time with his family, and his morning coffee buddies at McDonalds. Surviving him are his two sons Samuel R. Munson and his wife Barbara of Hammonton, and Elmer C. Munson Jr. and his wife Elizabeth of Millville, two grandchildren Sherry Caputo, and Jennifer Blackwell, five great grandchildren Heaven McNamara, Brandon Munson, David Blackwell, Ryan Blackwell, Alex Blackwell, and many nieces and nephews. Besides his parents and wife Beatrice, Jim was predeceased by his two brothers Thomas Munson and Raymond L. Munson, and his only sister Roberta Jones.

Elmer C. "Jim" Munson Sr. of Fairfield Twp. passed away late Friday evening April 1, 2011 at home with his family by his side. He had been in declining health for the past year. Born in Fairfield Twp. he was the son of the late... View Obituary & Service Information

The family of Elmer C. Munson Sr. created this Life Tributes page to make it easy to share your memories.