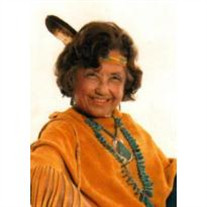 Elizabeth "Little Feather" Edwards, 91 of Hopewell Twp. and formerly of Fairfield passed early Friday morning November 26, 2010 in South Jersey Regional Medical Center, Vineland where she had been a patient for the past month. Born in the Back Neck section of Fairfield Twp. she was the daughter of the late Charles and Anna nee Carney Pearce, and the wife of the late Howard W. "Brings His Own Pipe" Edwards Jr. who passed away in 1985. Elizabeth was a long time member of Berean Baptist Church in Bridgeton, and had served as the church secretary for 25 years, retiring in 1997 when her health started to fail. She and her late husband, Howard were very active members of the Nanticoke Lenni Lenape Indian Tribe of Bridgeton and they traveled to many schools and civic organizations throughout South Jersey doing educational programs on the history and culture of Native people. Their house, and front lawn was often the meeting place for drum practice for the youth, and the singing and drumming could be heard throughout the neighborhood. Elizabeth was the oldest participating dancer at many tribal Powwows and gatherings until she suffered a stroke in 1997. She always opened Sunday Tribal Worship services during the Powwow with the Welcome Dance and at the age of 70 she was inducted into the Nanticoke Lenni Lenape Elder Hall of Fame. She was very close to her niece, Natalie Ridgway, and traveled with her throughout the Southwest, Canada, and Nashville, Tennessee, she also worked in Natalie's shop Natalie's Turquoise Treasures until its closing in 2007. This was a job she adored because of her love of Indian Jewelry, as she was often seen wearing it even in her pajamas. Elizabeth and Howard were also former members of the Colonial Riders Motorcycle Club and she loved riding her 45 Harley, she and her husband both participated in many races, scrambles and poker runs in their day. They passed thier love of motorcycles on to thier son Howard W. "Rides With The Eagle" Edwards III as he also rides a Harley. They also loved to travel and see the world, they were blessed to see Europe on a trip together and Elizabeth had also traveled to Israel with the church. She lived a fulfilling life that could only be summed up by a country song that says "If life is a highway, I want to ride it all night long". Elizabeth is survived by her loving son and daughter in law whom she went to live with when her health began to fail her, Howard W. "Cholly" Edwards III and his wife Barbara of Hopewell Twp., her two sisters Eliza Coombs of Hopewell Twp., Emily Loatman of Greenwich Twp., and her brother Joseph Pearce of Cherry Hill, her one granddaughter Amber Edwards, two sister in laws Dorothy Edwards of Deerfield Twp., and Viva Waters of Cherry Hill, her travel niece Natalie Ridgway of Alloway , and several other nieces and nephews. She was predeceased besides her husband by four sisters Ernestine Coombs, Doris Hughes, Mary Mosley, Madge Durham, and two brothers Charles Pearce, and Glendon Pearce.

Elizabeth "Little Feather" Edwards, 91 of Hopewell Twp. and formerly of Fairfield passed early Friday morning November 26, 2010 in South Jersey Regional Medical Center, Vineland where she had been a patient for the past month. Born... View Obituary & Service Information

The family of Elizabeth Edwards created this Life Tributes page to make it easy to share your memories.