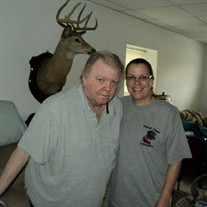 Edward E. “Tinker” Ford, 73 of Bridgeton, passed away suddenly on Tuesday evening June 2 in Inspira Health Medical Center, Vineland. Tinker was born in Bridgeton, the son of the late Edward and Isabel (Pierce) Ford and an area resident all of his life. He was employed as a truck driver with the Cumberland County Utilities Authority and had also previously worked for H. H. Hankins and Bro. in Bridgeton. Tinker enjoyed the outdoors and was an avid deer hunter; hunting in New Jersey and also taking many trips to Maine, Delaware, and other states. He was an avid fan of NASCAR and attended several races; and was a collector of country music CD’s and enjoyed watching old Westerns and War movies. Tinker was also a former member of the Hopewell Stow Creek Fire Company. Surviving him is his daughter Nancy Bowman and her husband Doug of Montana, his four brothers, William Ford, Franklin Ford, Calvin Ford, and Gary Lloyd; one sister, Jean Heath; two grandchildren, Kelli Barbeck and Jennifer Barbeck; five great grandchildren, and several nieces, nephews and extended family and friends. He was predeceased by a sister, Betty Collins, and brother, Russell Ford. Funeral services will be held on Tuesday June 9, 2015 at 11:00 a.m. from the SRAY-WEBSTER FUNERAL HOME, 62 Landis Ave. at Carll’s Corner, Upper Deerfield Twp. The interment will be in Laurel Lawn Cemetery, Upper Deerfield Twp. Friends may call on Tuesday morning from 10:00 to 11:00a.m. prior to the services. In lieu of flowers, the family requests donations be made to: The Salvation Army Bridgeton Corps, 29 West Commerce Street, Bridgeton, NJ 08302.

Edward E. &#8220;Tinker&#8221; Ford, 73 of Bridgeton, passed away suddenly on Tuesday evening June 2 in Inspira Health Medical Center, Vineland. Tinker was born in Bridgeton, the son of the late Edward and Isabel (Pierce) Ford and an... View Obituary & Service Information

The family of Edward E. "Tinker" Ford Jr. created this Life Tributes page to make it easy to share your memories.