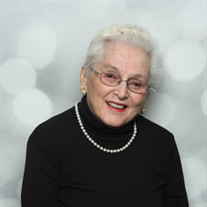 Dorothy “Dot” (Eddy) Peterson, 94, of Bridgeton, New Jersey went to be with the Lord on Sunday, May 16, 2021. She passed away from natural causes while surrounded by her loved ones in her own home. Dorothy was born on October 4, 1926 in New Brunswick, New Jersey, to R. Royle W. Eddy and Marie Hoagland Eddy. She was the first born of four daughters, two of whom have preceded her in death, Janet Deutsch, and Roberta Papcun, and one of whom who she is survived by, Eleanor Eddy. She shared so many wonderful lifelong memories with her sisters. Dorothy graduated from Bridgeton High School in 1944 and in 1948 she graduated from Douglas College (Rutgers University) with a Bachelor of Science. In 1971 she would go on to earn her Masters degree in Curriculum Development and Administration. Shortly after graduating from college, she married her high school sweetheart, Christian J. Peterson Jr. on July 9, 1949 who has preceded her in death in 2001. She is survived by their five children: Greg (Kathy), Bruce (Zina), Christian III (Karen), Dianne (Keith), and Robert (Shelly); her ten grand children: Shanna (Matthew), Amy (Robbie), Crystal, Christian IV, Joshua, Catherine (Matthew), Jonathan, Shenandoah, Brian, and Aaron; and her three great-grandchildren: Sydney, Owen, and Molly, as well as her three step-great-grandchildren Henry, Lana, and Scarlett. Dorothy has spent the last 5 years under the care of Vivian Danquah in her home. She was not only her caregiver, but her devoted and trusted friend. They shared a strong faith in Jesus and a strong bond of friendship. Dorothy excelled in her career as a teacher and retired Assistant Superintendant. She began her career as a social worker and truant officer, later became an English teacher, Department Head of the Language Department, Curriculum Coordinator, and finally served as Assistant Superintendant under Mr. Thomas C. Lane until reaching retirement in 1992. Over the course of her career she touched and impacted so many students’ lives and as a result has made a lasting impact on her community and the local school system. Dorothy was incredibly active in her Church, Berean Baptist Temple. She served as a Sunday School teacher, as the Church Clerk for over thirty years, as President of the Ladies Guild, as a Deacon, and as a member of several other boards and committees within the Church. In addition, she served in the Seven Oaks Club, where she made wonderful friends and touched her community. Dorothy’s unyielding faith throughout her life has been an exemplary example of living one’s life for the Lord. Visitors are welcome to come and pay their respects Thursday, May 20, 2021 from 10:00 am to 11:00 am at Sray Webster Funeral Home. The funeral service and burial will be private. She will be laid to rest next to her husband at Overlook Cemetery. In lieu flowers, the family invites donations to be made in memory of Dorothy Peterson, at the Scleroderma Foundation located at 300 Rosewood Drive, Suite 105, Danvers, MA 01923.

Dorothy &#8220;Dot&#8221; (Eddy) Peterson, 94, of Bridgeton, New Jersey went to be with the Lord on Sunday, May 16, 2021. She passed away from natural causes while surrounded by her loved ones in her own home. Dorothy was born on October 4,... View Obituary & Service Information

The family of Dorothy E. Peterson created this Life Tributes page to make it easy to share your memories.