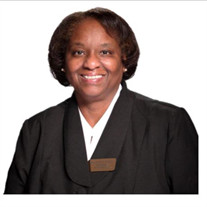 On the morning of February 21,2022, Donna Lucille Bard (nee Dunkins) transitioned from this life to be with the Lord, at the of 57. Donna was born on April 28, 1964 to Lucille G. Dunkins and the late James H. Dunkins, in Bridgeton N.J. During her early life, Donna was a resident of Bridgeton, NJ where she attended the Bridgeton Public Schools until the family moved to Hopewell, NJ and she attended Cumberland Regional High School graduating with the class of 1982. During her early years, Donna was an avid softball player at the West Cumberland Girls Softball League winning several honors during this time. Even from an early age, Donna loved to be in charge and usually was the organizer when she was out playing with her friends. In high school, she participated in field hockey, she served on Student Government, and she also served on her Class Reunion Planning Committee. Donna attended and graduated from Cumberland County College in 2002 with an Associate Degree in Education and she had several other college credits and additional certifications. Donna began working for the Bridgeton Public School System on October 15, 1997 and was employed in several positions over the years. She worked as a Teacher’s Aide, an Attendance Officer, a substitute teacher, a Parent Liaison and she worked in the after-school programs. Donna applied for and received early retirement on December 1, 2021, due to her failing health. In 1984, Donna married the love of her life, Gilbert Charles Bard, Jr. From this union was born a son, Gilbert C. Bard III. Gilbert and Donna were remarkably compatible and enjoyed a lot of the same activities. They attended Antique and Classic car shows, Monster Truck Rallies, and the entire family would gather to watch WWF Championship Wrestling. Her husband Gilbert’s heritage included the Nanticoke Lenni-Lenape Tribal Nation. He and Donna attended and supported the annual pow-wow’s. Donna was a passionate, faithful Dallas Cowboys fan and she cheered for her team no matter what. You could always see her wearing her Cowboy gear with pride. Bowling and bowling in leagues were one of her greatest passions with Donna and Gilbert both being very accomplished bowlers. They were members of several traveling teams and traveled all over bowling As an adult, Donna continued to play softball and she supported her husband Gilbert who played softball in several local leagues and for the Shiloh Baptist Church softball team. They were very devoted parents supporting their son Gilbert in all of his activities. Donna and Gilbert were committed members of Shiloh Baptist Church where they served in the offices of Deacon and Deaconess. Donna’s relationship with the Lord was the priority of her life and she was a part of several ministries in the church. She sang on the Mass Choir, the Women’s Choir, the Praise Team, she was one of the leaders of the Annual Youth Gospel Quake, Pastoral Relations, Women’s Ministry, the Stephanie C. Brown Scholarship Committee, Munchkins Ministry, Clerks Ministry and the Building New Lives Inc. CDC Pantry. Donna was also active in many organizations outside of church. She worked with the Bridgeton Municipal Alliance Youth-to-Youth, she was a Court Appointed Special Advocate, and she served on the Greater Bridgeton Women’s Club. One of her major activities came after she was diagnosed with Cancer. Donna had a fighting spirit that would not allow her to just sit back and be sick. She became an active organizer with the American Cancer Society. Working on many fronts, she always had a team entered in the Cumberland County Relay for Life Cancer fundraiser. Each year Donna would walk in the Susan B Komen Breast Cancer Foundation Cancer Walk in Cumberland County, in Ocean City, N.J. and in Philadelphia. Donna loved to travel and did not let the cancer slow her down. Whatever Donna wanted to do, she did and never complained about any discomfort or the pain. Donna was pre-deceased by her husband, Gilbert C. Bard Jr., father, James H. Dunkins, and her sisters, Diane Lee Dunkins, Naomi Haughton and Jeanette Rowe. Donna leaves to cherish her memory, her devoted son and daughter in law, Gilbert C. Bard III, (Jamie M.); her mother, Lucille G. Dunkins, her siblings: sisters, Jacqueline Johnson (Ardes) and Carolyn Hughes, brothers, James A. (Marsha) Dunkins, and Dennis H. (Anita) Dunkins; four grandchildren, Jahmia A., Ramon A, Janiya M., Ranayisha; one uncle, Willie Sease, Jr., and a host of aunts, cousins, nieces, nephews and Godchildren that love her dearly. Sorrowfully submitted, The Family

On the morning of February 21,2022, Donna Lucille Bard (nee Dunkins) transitioned from this life to be with the Lord, at the of 57. Donna was born on April 28, 1964 to Lucille G. Dunkins and the late James H. Dunkins, in Bridgeton N.J. During... View Obituary & Service Information

The family of Donna L. Bard created this Life Tributes page to make it easy to share your memories.