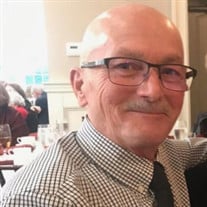 Christian J. Peterson III (“Chip”) of Wildwood, NJ passed away suddenly Tuesday evening August 31, 2021 in Cooper Medical Center, Camden. He was 64 years old. Born in Bridgeton to the late Christian J. Jr. and Dorothy (Eddy) Peterson, and the husband of Karen (Haaf) Peterson. Christian or “Chip” as he was known was an area resident for many years before moving to Wildwood. He attended the Woodruff School system, prior to attending and graduating first in his class from the Valley Forge Military Academy. He then attended and graduated from Mercer County College with a degree in Funeral Service. Chip worked at the former Carll Padgett Funeral Home in Bridgeton, the Radzieta Funeral Home in Cape May Court House, and the Carll Peterson Ilacqua Funeral Home in Bridgeton, which he owned and managed for several years. In Cape May County he owned and operated with his wife Karen a Bread Service company, 4 Shore Distribution which he was extremely proud of and very much appreciative of his employees and customers. Chip was a former member of the Jaycees in Bridgeton, the Kiwanis Club, Ionic Lodge 40 Free and Accepted Masons, and the Wildwood Chamber of Commerce. He leaves to cherish his memory his wife Karen, his children Christian J. Peterson IV of California, Joshua C. Peterson of Nevada, and Jeffrey Miletta and his wife Amber of Ocean City, NJ, his grandchildren, Tessa, Ronan, and Nico, three brothers, Greg Peterson and his wife Kathy of Upper Deerfield, Bruce Peterson and his wife Zina also of Upper Deerfield, Robert Peterson and his wife Shelly of Beaumont, Texas, and his sister, Dianne Hill and her husband Keith of Fredricksburg, Virginia. Besides his mother and father, Chip was predeceased by a granddaughter, Macee Miletta in 2019. Funeral services will take place privately and at the convenience of the family. A public celebration of Chip’s life will be announced at a later date.

The family of Christian "Chip" J. Peterson III created this Life Tributes page to make it easy to share your memories.