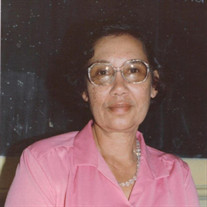 Carrie G. Wright, aged 90 years, of Fairfield Township, NJ, went home to be with the Lord early Thursday morning December 4, 2014. Carrie was born May 18, 1924 in Bridgeton, NJ. She was the daughter of the late Craig F. and Maude Pierce Gould, and the wife of the late Robert Harold Wright. She graduated from Bridgeton High School in 1941 and Glassboro State College in 1945 with a Bachelor of Science degree in Elementary Education. Carrie was unable to gain employment upon graduation in the local area, and began her teaching career at an elementary school in Maryland. She later found employment in the Bridgeton School System teaching elementary education at the Buckshutem Road School. She then was employed by, and finished her 36 year career with the Fairfield Twp School System primarily at the Gouldtown Elementary School. Upon retirement, she continued to provide in the field of adult education. Carrie began attending Trinity A.M.E. Church, Gouldtown as a child and became a life member. During her tenure at the church, she was a Sunday School teacher, president of the Alice Felts Club, president of the Stewardess Board, and president of the Alice Felts Federated Club. Other community services activities included serving as the secretary of the Young People’s Progressive Club of Gouldtown, Colonial Riders Motorcycle Club of Carmel, NJ, and the Nanticoke Lenni Lenape Indian Tribe of Bridgeton, NJ. She enjoyed reading books, crocheting, and researching her family genealogy. She was predeceased by her husband Robert Harold Wright of almost 65 years. She is survived by her two sons, Robert H. Wright Jr. and his wife Anna, Craig A. Wright and his wife Barbara, sister, Esther Valentine, sister in law, Janice Pierce and her husband Everett, grandchildren, Esa Staples, Anton Wright, Byron Wright, Laura Wright, Stefanie Wright, Nicole Wright-Boneta, and her husband Jose, great grandchildren, Ayden Staples, Kaylee Wright, Liliana Boneta, and a host of nieces nephews and cousins. Besides her parents and husband, she was predeceased by a son, Alfred G. Wright, grandson, Colin H. Wright, a sister in law, Gloria Wesley, brother in laws, Alfred Wright, Carmelo Valentine, and Monroe H. Wesley. Family and friends are invited to attend funeral services on Tuesday December 9, 2014 at 11:00a.m from Trinity A.M.E. Church, Rt. 49 Gouldtown, NJ. Interment will be in Gouldtown Memorial Park. Friends may call on Tuesday morning from 9:00 to 11:00a.m. prior to the services at the church.

Carrie G. Wright, aged 90 years, of Fairfield Township, NJ, went home to be with the Lord early Thursday morning December 4, 2014. Carrie was born May 18, 1924 in Bridgeton, NJ. She was the daughter of the late Craig F. and Maude Pierce... View Obituary & Service Information

The family of Carrie G. Wright created this Life Tributes page to make it easy to share your memories.