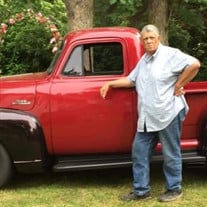 Carl E. “Cooty” Pierce, of Millville passed away early Friday evening June 26, 2020 in Select Specialty Care Hospital in Wilmington Delaware. He was 68 years old and had been in failing health since April. Born in Fairfield Twp. July 8, 1951, he was the son of the late Alvin Russell Pierce Sr. and Artalissa Rebecca Johnson Pierce, and the husband of Natalie A. Mosley Pierce. Coot enlisted in the US Army after high school, and after his honorable discharge he worked for a few years as a Boiler Operator in the Fairfield Twp. School system. He then went to work in the same capacity with Atlantic City Electric in the BL England Plant for 25 years until his retirement. Never one to sit still, he went back to work at Rowan University in maintenance for 8 more years. He always had a love for cars, and he particularly loved going over to his good friend, Steve Stankiewicz garage where they fooled with Hot Rods. He was a member of the Road Wreckers car club and the Nanticoke Lenni Lenape Indian Tribe. He loved camping with his family and he enjoyed taking long rides, but he would have to drive. He was a devoted husband, father, brother and friend. Carl is survived by his wife Natalie, his children: Ryan E. Pierce and his wife Pamela of Millville, Amanda Zee and her husband Jeremy of Sicklerville; his brothers, Alvin Russell Pierce Jr. and Diane, Bruce W. Pierce, sisters, Ruth Conaway and Winfield, and Alice “Ray” Harmon. Besides his parents he was predeceased by two sisters Marie A. “Sissy” Henry, and Artalissa “Dolly” Johnson, and also by his mother and father in law Boyd and Anna Mosley. Graveside funeral services will be held with military honors on Thursday July 2, 2020 at 10:15 a.m. in Cumberland County Veterans Cemetery. Rev. Herbert Pierce will conduct the service. With the current health pandemic, everyone attending will be required to wear a mask and practice social distancing.

Carl E. &#8220;Cooty&#8221; Pierce, of Millville passed away early Friday evening June 26, 2020 in Select Specialty Care Hospital in Wilmington Delaware. He was 68 years old and had been in failing health since April. Born in Fairfield... View Obituary & Service Information

The family of Carl E. "Cooty" Pierce created this Life Tributes page to make it easy to share your memories.