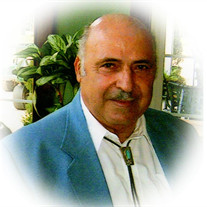 Calvin “Blake” Pierce, of Fairfield Twp. and formerly of Greenwich, passed away early Monday morning October 14, 2019 under Hospice Care at the home of his granddaughter Roberta Flores. He had been in declining health for the past few years. He was 94 years old. Born in Greenwich September 26 1925, he was the son of the late Calvin Sr. and Theresa (nee Pierce) Pierce and the husband of the late Margaret E. (nee Gould) Pierce who passed away in 2008. Blake was employed in construction for many years with the Warshaw Construction Company in New York City. He and his wife, and children, lived in Brooklyn for 29 years while he was involved with the building and construction of many subways and bridges in the New York City area. He was a member of the United Brotherhood of Carpenters and Joiners of America. After retiring, he and his family moved back to New Jersey and settled in the Greenwich area. He and Margaret enjoyed camping and vacationing, and he was a member of the Colonial Riders Motorcycle Club. Blake was also a former Mason. In his spare time he enjoyed gardening and working on small engines and lawnmowers; a task that turned into a part time business until his health began to fail. He was also a member of the Nanticoke Lenni Lenape Indian Tribe of Bridgeton, and enjoyed attending gatherings and Pow Wow’s. He is survived by his daughter, Anna T. Pierce and her husband Charles of Fairton, his grandchildren, Roberta Flores, Calvin Jones, Michelle Miller, Albert Miller Jr., Christine Miller, eight great grandchildren, and two great great grandchildren. Besides his parents and wife Margaret, he was predeceased by his daughter and son in law, Margaret L. Miller and husband Albert, a sister, Sarah E. Webster, and three brothers, Thomas, Lewis, and Howard Pierce. Family and friends are invited to attend funeral services on Friday October 18, 2019 at 11:00a.m. from the SRAY-WEBSTER FUNERAL HOME, 62 Landis Ave. at Carll’s Corner, Upper Deerfield Twp. The interment will take place in Gouldtown Memorial Park, Fairfield Twp. A visitation will be held on Friday morning from 10:00a.m. till 11:00a.m. prior to the services.

Calvin &#8220;Blake&#8221; Pierce, of Fairfield Twp. and formerly of Greenwich, passed away early Monday morning October 14, 2019 under Hospice Care at the home of his granddaughter Roberta Flores. He had been in declining health for the past... View Obituary & Service Information

The family of Calvin "Blake" Pierce created this Life Tributes page to make it easy to share your memories.

Calvin “Blake” Pierce, of Fairfield Twp. and formerly of Greenwich,...