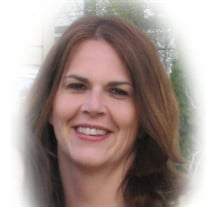 Belinda E. Meehan, aged 45 years of Upper Deerfield Twp., passed away suddenly on Tuesday, June 9, 2015 in Inspira Medical Center, Elmer. Her death was sudden and unexpected. Born April 22, 1970 in Nordlingen, Germany she was the daughter of Charles and Annelie (nee Meier) Outland, and the wife of Michael A. Meehan. Belinda moved to this area with her parents and brother in 1972 and had been a lifelong resident. She was employed with the State of New Jersey at South Woods State Prison for the past six years, and had previously worked for the Upper Deerfield Board of Education in food service. A loving mother, nothing made her happier than spending time with her children and grandchildren who were absolute lights in her life. Belinda enjoyed traveling, sightseeing, and camping with her family. She also loved spending time with and going on motorcycle rides with her beloved husband Michael. In recent months, Belinda was especially proud of numerous family events and achievements such as the birth of her third grandchild, the marriage of her second oldest daughter and the upcoming high school graduation of her youngest daughter. She was never without her friendly smile and will be truly missed by all who knew her. Surviving her besides her loving husband Michael of ten years, are her parents, Charles and Annelie Outland of Rosenhayn; her mother and father in law, Max and Kathy Schmidt of Upper Deerfield Twp.; her children, Kirsten Simpkins and her partner Joseph Hamidy of Hopewell Twp., Breanna Talmadge and her husband William of Vernon, NJ, Eric Simpkins of Hopewell Twp., Courtney Simpkins, Kelsey Simpkins, and Michael A. Meehan of Upper Deerfield; her brother, James T. Outland and his wife Ammilee of Ft. Meade, MD; her brother in law, Stephen Meehan and his wife Tracy; and sister in law, Kimberly Bader, all of Upper Deerfield; her three grandchildren, Hailey, Jayden, and Jaxon; nieces and nephews, Jeffrey Meehan and his wife Heather of Bridgeton, Jessica Meehan of Philadelphia, Lukas Outland of Ft. Meade, MD, and Bruce Bader of Upper Deerfield; four uncles, David Outland of Atlantic County, Georg Meier and family, Joachim Meier and family, Manfred Meier and family, all of Germany, Alvan Outland and family of Warminster, PA and several cousins residing in Germany. She was predeceased by her maternal grandparents, Georg and Anna Meier; her paternal grandparents, Homer and Emily Outland; maternal aunts and uncles, Georgine Holzner and Brigitte Meier and Roland Meier and Gunter Meier. Family and friends are invited to attend funeral services on Friday June 19, 2015 at 1:00p.m. from the SRAY-WEBSTER FUNERAL HOME, 62 Landis Ave. at Carll’s Corner, Upper Deerfield Twp.. The interment will be in Fernwood Memorial Park, Hopewell Twp. Friends may call on Friday morning from 11:00a.m. to 1:00p.m. prior to the services at the funeral home.

The family of Belinda E. Meehan created this Life Tributes page to make it easy to share your memories.