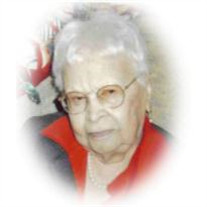 Anna M. Pierce , 94 of Bridgeton died early Sunday morning December 10, 2006 in South Jersey Regional Medical Center , Vineland where she had been a patient for the past several days. Born in Fairton , NJ she was the daughter of the late Russell and Bertha nee Cuff Webster, and the wife of the late Wilbert L. ?Sonny? Pierce. She had been a Bridgeton area resident all of her life. Mrs. Pierce was a homemaker , but she was formerly employed with Siebel and Stern in Bridgeton. She was a member of Trinity A.M.E. Church in Gouldtown , where she had served as a member of the Usher Board, Stewardess Board No. #2, and an emeritus member of the Missionary Board. She also served has a member of the Independent Church Aid. She will be remembered as a loving mother, grandmother, great grandmother and great great grandmother. Surviving , to cherish her memory are one son Lawrence W. Pierce Sr. and his wife Geraldine J. of Millville, and one daughter Alberta M. Pierce, of Fairfield Twsp., five grandchildren Dottye Gould-Smith and her husband Ron of Hagerstown , MD, Jacqulyn Burroughs and her husband Robert of Norma, NJ , Helen M. Fishman and her husband Dr. Scott Fishman of Bridgeton, Lawrence W. Pierce Jr. and his wife Robyn of Jacksonville, Fla., and Melissa Bradshaw and her husband Tyrone of Millville, two sister in laws Ida Webster and Sarah Webster both of Fairfield Twsp., twelve great grandchildren, and eight great great grandchildren, and several nieces and nephews. Besides her husband she was predeceased by her son in law, William E. Pierce, two brothers Elmer and Lawrence Webster, one sister Estella Riley, and a great grand daughter Gerri Bradshaw. Family and friends are invited to attend funeral services on Saturday December 16, 2006 from Trinity A.M.E. Church , Rt. 49 Gouldtown at 12:00 p.m. . Mrs. Pierce?s former pastor, Rev. Alvin Stokes and her current pastor, Rev. Michael Keen will be officiating. The interment will take place in Gouldtown Memorial Park , Fairfield Twsp. Friends may call at the church on Saturday morning from 10:00 to 12:00 p.m. prior to the services. In lieu of flowers the family suggests donations in memory of Mrs. Pierce be made to Trinity A.M.E. Church in C/O the Riley-Gould Scholarship Fund 1107 Bridgeton Millville Pike, Bridgeton, NJ 08302.

Anna M. Pierce , 94 of Bridgeton died early Sunday morning December 10, 2006 in South Jersey Regional Medical Center , Vineland where she had been a patient for the past several days. Born in Fairton , NJ she was the daughter of... View Obituary & Service Information

The family of Anna M. Pierce created this Life Tributes page to make it easy to share your memories.