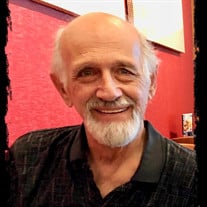 Alfred Massari of Vineland passed away Saturday morning June 8, 2019 in Inspira Medical Center, Vineland. He was 72 years old. Born in Vineland, to the late Rosario and Jeannie (nee Moschetti) Massari, he had been an area resident most of his life and had also previously lived in Pennsville and Delaware. Alfred was a 1965 graduate of Vineland High School and a 1969 graduate of Combs College of Music in Philadelphia. He was an accomplished musician playing both the piano and accordion. In the early 60’, Alfred was a founding member of the Capri’s and also a founding member of the Freedom Jazz Sextet. After graduating from college, he taught music in St. Francis School and also in the Millville school system. Alfred was also the retail manager of several K Mart’s in Vineland, Pennsville and Delaware for over 20 years until his retirement. He attended Christ Community Church in Newfield. He loved playing music, and also photography, building model airplanes, cooking, and watching NHRA drag racing. With his two sons, he enjoyed collecting coins, sports cards, comics, and fantasy football. He loved life and enjoyed spending time with his family. He is survived by his sons, Steve Massari and his wife Diane of Bridgeton, and Scott Massari of Salisbury Maryland. A sister, Barbara Sheldon and her husband Bill of Buena, his grandson, Brett Massari, several aunts, uncles, cousins and one niece. Family and friends are invited to attend funeral services on Thursday June 13, 2019 at 12:00p.m. from the SRAY-WEBSTER FUNERAL HOME, 62 Landis Ave. at Carll’s Corner, Upper Deerfield Twp. A viewing will be held from 11:00a.m. till 12:00p.m. prior to the services. The interment will be in Sacred Heart Cemetery, Vineland. In lieu of flowers, the family suggests donations be made to the American Stroke Association 7272 Greenville Ave. Dallas, TX 75231.

Alfred Massari of Vineland passed away Saturday morning June 8, 2019 in Inspira Medical Center, Vineland. He was 72 years old. Born in Vineland, to the late Rosario and Jeannie (nee Moschetti) Massari, he had been an area resident most... View Obituary & Service Information

The family of Alfred Massari created this Life Tributes page to make it easy to share your memories.