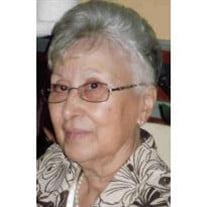 Alberta M. Pierce 73, of Gouldtown died Thursday morning August 16, 2007 in South Jersey Regional Medical Center, Vineland where she had been a patient the past six days. Her death was unexpected. Born in Bridgeton the daughter of the late Wilbert L. and Anna M. nee Webster Pierce, she was the wife of the late William E. Pierce. She had been a resident of the Gouldtown area for the past forty eight years. Mrs. Pierce was formerly employed with the Fairfield Twp. Board of Education as a Teacher?s Aide. She was known as the historian of the family and was very meticulous in genealogy. She was a great care giver, not only to family, but to many of her friends as well. She enjoyed arts and crafts of all kinds and was always working on a project. She enjoyed cooking, and spending time with her family and many friends. She leaves to cherish her memory, three daughters Dottye Gould Smith and her husband Ron of Hagerstown, MD, Jacqulyn Burroughs and her husband Robert of Norma, NJ, and Helen M. Fishman and her husband Dr.Scott Fishman of Bridgeton, one brother Lawrence W. Pierce Sr. and his wife Geraldine of Millville seven grandchildren Wilbert Ryan Gould, Andre Burroughs, Lisa Burroughs, Kimmi Smith, Janet Burroughs, Mallory Bodhuin and Sarah Bodhuin , eight great grandchildren and a host of nieces, nephews, and friends. Family and friends are invited to attend funeral services on Tuesday August 21, 2007 at 1:00 p.m. from Trinity A.M.E. Church, Rt. 49 Gouldtown. Dr. Michael Keen, pastor of the church will officiate. The interment will take place in Grennwood Memorial Park, Millville, NJ. Friends may call on Tuesday morning from 11:00 to 1:00 p.m. at the church prior to the services.

Alberta M. Pierce 73, of Gouldtown died Thursday morning August 16, 2007 in South Jersey Regional Medical Center, Vineland where she had been a patient the past six days. Her death was unexpected. Born in Bridgeton the daughter... View Obituary & Service Information

The family of Alberta M. Pierce created this Life Tributes page to make it easy to share your memories.